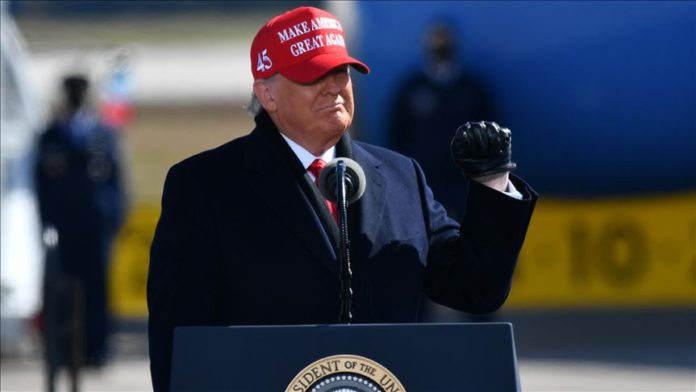 US President Donald Trump on Thursday slammed a delay in counting ballots cast in the 2020 US presidential race in North Carolina as the state is yet to call a winner.

“It took long enough! What is taking North Carolina so long? Are they looking for more ballots to fix that one also?” Trump said, posting The Associated Press tweet that called him the winner of Alaska’s three electoral votes.

“Now with a recount, we will win Georgia also. Pennsylvania & Michigan wouldn’t let our Poll Watchers & Observers into counting rooms. Illegal!” he added.

Twitter immediately labeled Trump’s tweet with a warning. “This claim about election fraud is disputed,” the microblogging site said.

In a separate tweet, Trump urged a total audit in Arizona — a state called for President-elect Joe Biden by the AP.

“From 200,000 votes to less than 10,000 votes. If we can audit the total votes cast, we will easily win Arizona also!” he tweeted, referencing an article by the Arizona Central website that said Biden’s lead in the state is shrinking.

The state of Georgia announced Wednesday that it would conduct a hand recount after Trump vowed legal action for allegations of widespread voter fraud, demanding recounts in Georgia, Michigan and Pennsylvania.

Meanwhile, the Biden team is urging the US General Services Administration to “move quickly” on certification of a presidential transition team which is currently on hold.

Biden is expected to press ahead with cabinet picks despite Trump’s reluctance to concede.