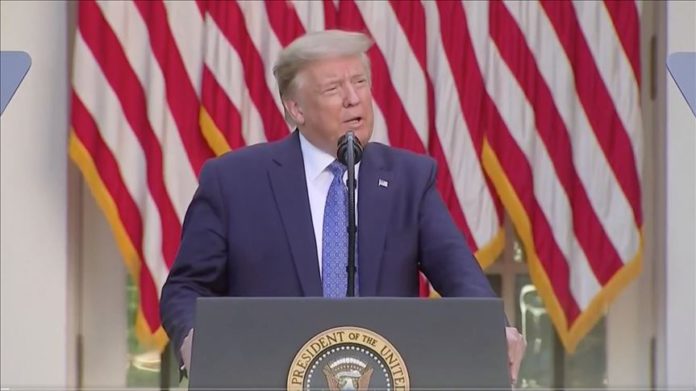 Amid persistent unrest in the US over the death of George Floyd, President Donald Trump said Monday he is mobilizing all federal and local civilian and military resources in response to week-long violent protests.

Speaking at the White House, Trump described the looting and vandalism during the protests as “domestic terror” and said he has asked every governor to deploy the National Guard “in sufficient numbers that we ‘dominate’ the streets.”

“As we speak, I am dispatching thousands and thousands of heavily armed soldiers, military personnel and law enforcement officers to stop the rioting, looting, vandalism, assaults and the wanton destruction of property,” he told reporters.

His remarks came as the protests entered their seventh day across the nation after Floyd, an unarmed black man, died on May 25 in Minneapolis, Minnesota after being pinned to the ground by a white police officer, Derek Chauvin, who appeared in multiple videos of the arrest to hold his knee to Floyd’s neck for 8 minutes and 46 seconds despite his pleas that he could not breathe.

Those pleas ended when Floyd appeared to lose consciousness, but Chauvin continued to maintain the position on Floyd.

Drs. Michael Baden and Allecia Wilson determined Floyd’s death “was homicide caused by asphyxia due to neck and back compression that led to a lack of blood flow to the brain,” according to Ben Crump, an attorney hired by Floyd’s family to represent the victim.