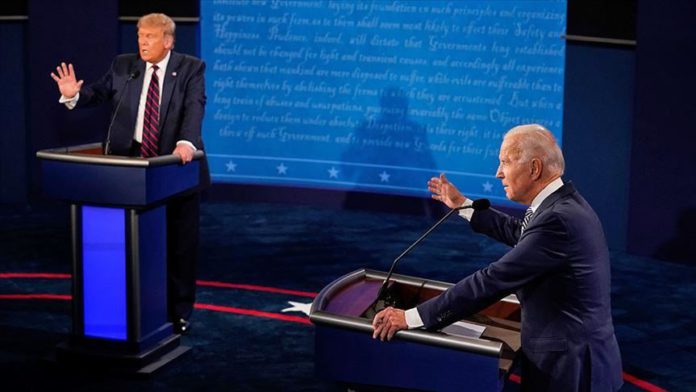 US President Donald Trump is ahead of his Democratic contender Joe Biden in some key swing states in the upcoming 2020 presidential election on Tuesday, according to a polling company.

Trafalgar Group, which predicted Trump’s victory in 2016, shows he is leading Biden in many swing states like Florida, Pennsylvania, Michigan, North Carolina and Arizona, unlike most other nationwide polls that predict a Biden victory.

The Atlanta-based opinion polling and survey company’s latest poll indicates Trump is leading Biden by 2.7 points in the state of Florida, while the New York Times’ poll projects a 3-point win by the former vice president for the 29 electoral votes in Sunshine State.

In Pennsylvania, Trafalgar Group shows a 0.8 point lead for Trump, while a poll by ABC News and the Washington Post predicts a 7-point win for Biden for the 20 electoral votes in Keystone State.

The firm’s latest poll in North Carolina forecasts 2.1 points of lead by Trump over his opponent for 15 electoral votes in Old North State, while think tank Data for Progress shows a 2-point lead by Biden.

In Wisconsin and Minnesota, however, the company sees Biden ahead of Trump, for the 10 electoral votes in each of these states.

Trafalgar Group explains delivering its polling questionnaires in a mix of different methods, such as live calling, integrated voice response, text messages, emails, and two other proprietary digital methods they say they do not share publicly.

“The firm’s polls last one to two minutes and are designed to quickly get opinions from those who would not typically participate in political polls,” according to Robert Cahaly, senior strategist and pollster.