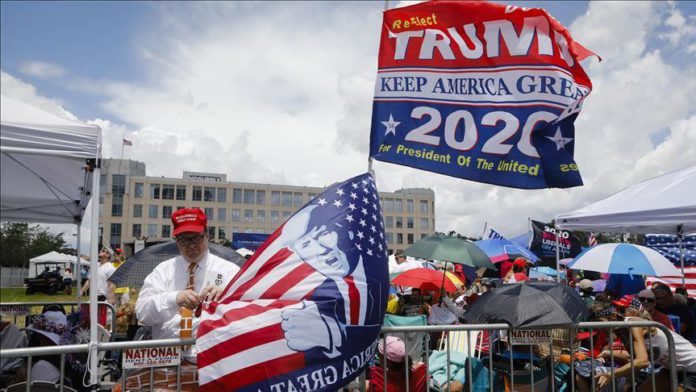 “RIGGED 2020 ELECTION: MILLIONS OF MAIL-IN BALLOTS WILL BE PRINTED BY FOREIGN COUNTRIES, AND OTHERS. IT WILL BE THE SCANDAL OF OUR TIMES!” Trump said on Twitter.

He did not present any evidence of an international conspiracy to substantiate his claim.

US elections are implemented at the state level, and several governors have said they will work to ensure voters are able to cast their ballots during the coronavirus pandemic by implementing widely available mail-in balloting.

Trump said doing so would result in “the most RIGGED Election” in US history “unless this stupidity is ended.”

“We voted during World War One & World War Two with no problem, but now they are using Covid in order to cheat by using Mail-Ins!” said Trump, who has cast mail-in ballots himself.

Health authorities have warned that a second wave of the virus is likely to hit the US in the fall, even as the country continues to find itself in the midst of its first wave with a rising numbers of cases. And fatalities linked to the virus are nearing 120,000, according to data from Johns Hopkins University.

Trump’s bid for re-election has been dealt a series of blows in the last couple of weeks with multiple polls showing him trailing presumptive Democratic nominee Joe Biden by roughly 9% nationally.

Over the weekend, Trump held his first campaign rally since he was forced to halt them in March due to the coronavirus pandemic.

The event was intended to demonstrate the president’s popularity and ardent support heading into November, but while his campaign said over one million tickets were requested for the Tulsa, Oklahoma rally, wide swathes of the over 19,000-seat arena were empty.

Fewer than 6,200 people attended the event, according to the Tulsa Fire Department.

One day ahead of the event, the conservative Fox News television network released a poll indicating the majority of voters – 59% – say presidential candidates holding campaign rallies amid the pandemic is a bad idea. Only 23% said they thought it was a good idea.