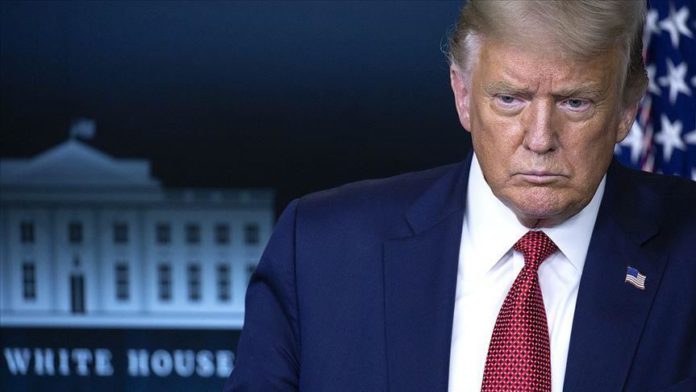 WASHINGTON (AA) – US President Donald Trump continued to strongly lash out Friday against a report that he denigrated America’s war dead as “losers” and “suckers.”

Citing anonymous source the Atlantic magazine reported Thursday that during a 2018 visit to France Trump called off a visit to the Aisne-Marne American Cemetery near Paris where America’s World War I dead are buried, because he did not respect those buried at the site.

“Why should I go to that cemetery? It’s filled with losers,” Trump told senior staffers at the time, according to the magazine. He also said the over 1,800 marines who lost their lives at Belleau Wood, a pivotal battle in the first world war, were “suckers” for getting killed.

Asked by a reporter in the Oval Office if he owes an apology to US service members and veterans, Trump said, “No. It’s a fake story written by a magazine that was probably not going to be around much longer.”

“It was a totally fake story, and that was confirmed by many people who were actually there,” he said. “It was a terrible thing that somebody could say the kinds of things, especially to me, because I have done more for a military than almost anybody else.”

The White House said in November 2018 when Trump was visiting France that the trip to the Aisne-Marne American Cemetery was cancelled due to bad weather, which the Atlantic reported was untrue.

While fog officially prompted the cancellation of the planned helicopter ride to the cemetery, a drive to the site was possible, but Trump scuttled the idea out of concerns that being out in the rain would make his hair appear a mess, and because he did not feel it was important to honor those who died, according to the magazine.

While addressing reporters on Friday, Trump said “there’s nobody who considers the military, and especially people that have given their lives in the military, to me they’re heroes.”

“It’s even hard to believe how they could do it, the level of bravery, and to me they are absolute heroes,” he said.

He further denied on Twitter calling passed Senator John McCain a “loser” prior to his August 2018 death, and telling his staff “we’re not going to support” his funeral.

Trump acknowledged never being “a big fan of John McCain,” but claimed his funeral “had to be approved by me, as President, & I did so without hesitation or complaint.”

Trump is on record, however, saying in 2015 that McCain, who was subject to torture after being captured during the Vietnam War, was “not a war hero.”

“I like people who weren’t captured,” he said during a summit in Iowa.