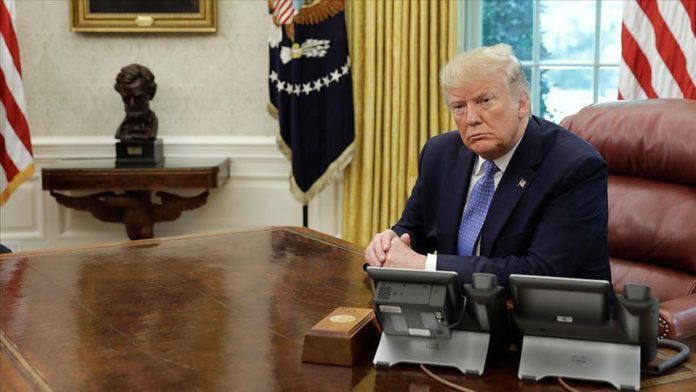 US President Donald Trump and his Egyptian counterpart Abdel Fattah al-Sisi on Monday discussed developments in war-weary Libya, according to Cairo.

In a phone call, the two leaders discussed issues such as security in Libya, protecting state institutions, and the presence of foreign powers in the country, according to a statement by the Egyptian presidency.

Al-Sisi reiterated Egypt’s strategy and stance, claiming that it prioritizes stability in Libya, the statement said.

Trump, for his part, underlined the negative effects of the Libyan crisis on the region, and praised Egypt’s efforts for a political solution in the country, said Cairo.

The two leaders agreed to work for a permanent cease-fire and to reduce tension in Libya, it added.

The conversation was notable for coming on the same day Egypt’s parliament approved a proposal authorizing military intervention in neighboring Libya, a move likely to worsen regional tensions.

Last week, Libya’s Tobruk parliament, affiliated with warlord Khalifa Haftar, gave Egypt the green light to militarily intervene in Libya under the pretext of “protecting the national security” of both countries.

According to the US State Department, during the conversation Trump also reiterated the US commitment to facilitate a “fair and equitable” deal among Egypt, Ethiopia, and Sudan on the Grand Ethiopian Renaissance Dam.

Disputes arose among countries in the region when Ethiopia began the dam’s construction in 2011.

Ethiopia, which provides about 90% of its electrical needs from hydroelectricity, aims to boost its energy production with the dam, set to be the largest in Africa.

Tension is mounting between Egypt and Ethiopia over their failure so far to reach agreement on a mechanism to fill and operate the dam.

Ethiopia has said it will start filling the dam in July, while Egypt and Sudan are opposed to the move before a tripartite agreement is reached.

Turkey: Motion on troops in Libya headed to parliament

December 7, 2019
We use cookies to ensure that we give you the best experience on our website. If you continue to use this site we will assume that you are happy with it.Ok