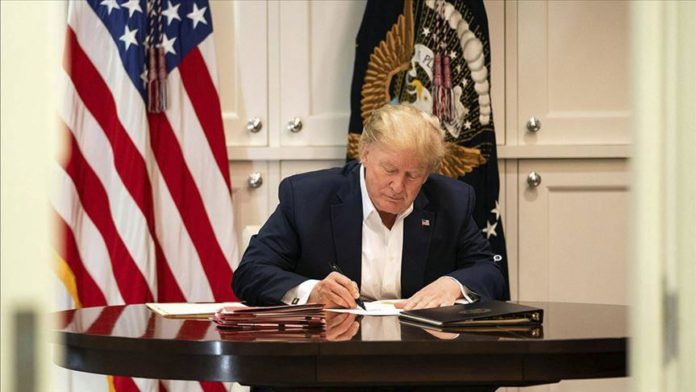 US President Donald Trump could be discharged as soon as Monday from the Walter Reed Medical Center, where he is receiving treatment for the novel coronavirus.

In a press briefing on Sunday, Dr. Brian Garibaldi, who is part of Trump’s medical team, said the president was feeling well and that they planned for him to eat, drink and be out of bed on Sunday.

“And if he continues to look and feel as well as he does today, our hope is that we can plan for a discharge as early as tomorrow to the White House where he can continue his treatment course,” said Garibaldi.

Trump’s personal physician, Dr. Sean Conley, for his part, said the president has been improving since Saturday, adding: “As with any illness, there are frequent ups and downs.”

Conley said Trump had had a high fever when he returned to his bedside late on Friday morning and that his oxygen saturation had been transiently dipping below 94%.

“Given these developments, I was concerned for possible rapid progression of the illness. I recommended the president we try supplemental oxygen, see how he would respond. He was fairly adamant he didn’t need it.”

He noted that the president was not short of breath but was tired and had a fever.

“After about a minute on only two liters, his saturation levels were back over 95%. He stayed on that for about an hour maybe, and it was off and gone,

“Later that day, by the time the team here was at the bedside, the president had been up out of bed moving about the residence with only mild symptoms,” he added.

Trump, who announced his diagnosis early on Friday, falls in the category of highest-risk COVID-19 patients, as he is considered medically obese and is 74 years old.

His announcement came hours after Hope Hicks, one of his closest aides who traveled with him as recently as Wednesday, tested positive for the virus.