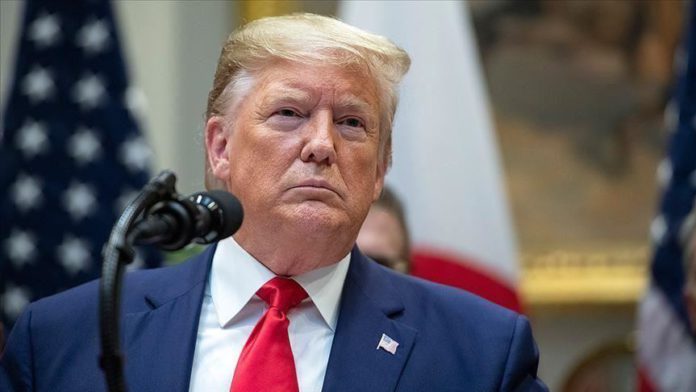 US President Donald Trump claimed Tuesday that an elderly man caught on a viral video being pushed to the ground by police officers in Buffalo, New York “could be an ANTIFA provocateur.”

“Buffalo protester shoved by Police could be an ANTIFA provocateur. 75 year old Martin Gugino was pushed away after appearing to scan police communications in order to black out the equipment,” Trump said on Twitter.

The incendiary claim came four days after two Buffalo police officers were charged with assault. Aaron Torgalski, 39, and Robert McCabe, 32, pleaded not guilty and were released without bail.

In the video, his head was seen bleeding after hitting the ground. He is still in hospital, according to multiple outlets.

“@OANN I watched, he fell harder than was pushed. Was aiming scanner. Could be a set up?” Trump said, referring to the conservative One America News Network (OANN).

The US has been gripped by two-week protests after the death of George Floyd with thousands taking to the streets calling for end to police brutality.

Some violent groups came to the fore with looting and arsons and vandalism.

Trump blamed the anti-fascist group Antifa for the incidents and said it would be designated as a terrorist group.

The May 25 death of Floyd elicited widespread outrage against police brutality and racial injustice that has manifested in continuing nationwide protests that occasionally devolved into violence and looting.

Floyd’s death, as well as repeated scenes of heavy-handed police crackdowns on demonstrators, have resulted in increased calls in cities nationwide for police departments to be defunded, or dissolved altogether.

In Minneapolis, Minnesota, the city where Floyd died, a majority of City Council members have said they support disbanding the police department. Mayor Jacob Frey has voiced opposition to the proposal.