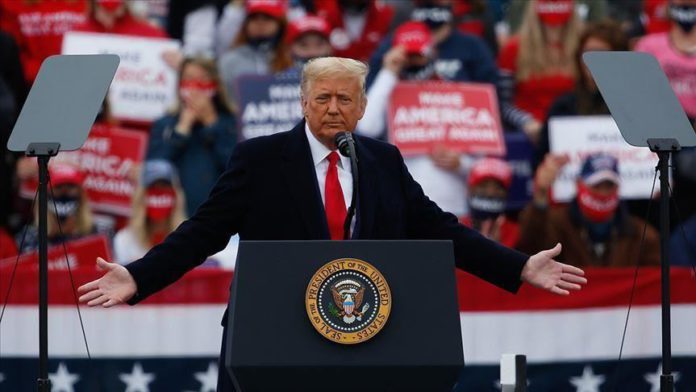 US President Donald Trump claimed Wednesday that ballot counts in key Democrat-run states have erased his lead in the 2020 US presidential election.

“Last night I was leading, often solidly, in many key States, in almost all instances Democrat run & controlled,” Trump wrote on Twitter. “Then, one by one, they started to magically disappear as surprise ballot dumps were counted. VERY STRANGE, and the “pollsters” got it completely & historically wrong!.”

His comments came after he lost the lead to his contender Democratic candidate Joe Biden in the battleground state of Michigan where the race intensified and became much closer than most polls expected for the 16 electoral votes.

“How come every time they count Mail-In ballot dumps they are so devastating in their percentage and power of destruction?” he wrote in a separate tweet.

But several key states remain too critical to be yet called, including in Georgia, North Carolina, Pennsylvania, Michigan, Wisconsin, Nevada and Alaska.

Biden responded by saying: “We won’t rest until everyone’s vote is counted.”

The president prematurely claimed victory late Tuesday and threatened to go to the Supreme Court to prevent more ballots from being counted in some swing states despite the possibility that vote counting may continue even to Thursday.

“We want all voting to stop. We don’t want them to find any” additional ballots, he said, as several states grapple with a deluge of mail-in votes, some of which were not legally allowed to be counted until Election Day.

“This is a fraud on the American public. This is an embarrassment to our country. We were getting ready to win this election, frankly, we did win this election,” Trump told supporters early Wednesday at the White House.