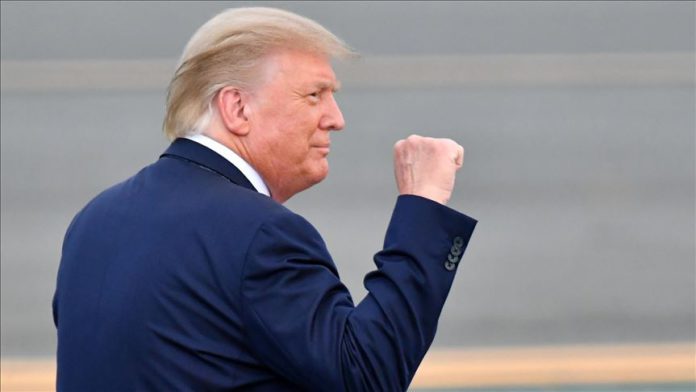 US President Donald Trump applauded Friday the decision of banking giant JPMorgan Chase to resume work from office for some senior employees.

“Congratulations to JPMorgan Chase for ordering everyone BACK TO OFFICE on September 21st. Will always be better than working from home!” he tweeted.

The US bank ordered earlier in the day senior sales and trading personnel to return to offices after months of working from home due to the novel coronavirus.

Senior managers in sales and trading departments of the company, who are viewed as critical for training new employees, will be returning to work in the New York and London offices starting from Sept. 21, Monday.

However, some exemptions include if employees are at high-risk or living with someone who is,, or they cannot find alternatives for homeschooling and child-care.

Most of the US labor force has been working from home since March due to the pandemic, while more than 10 million people remain unemployed in the world’s largest economy.

It is critical for major banks to preserve their assets, as financial markets are in turmoil with uncertainty over global economy and risks surrounding US-China trade relations.

“I have taken the toughest-ever action to stand up to China’s rampant theft of Michigan jobs … Joe Biden’s Agenda is Made in China, my agenda is Made in the USA!” Trump said in an earlier tweet on Thursday.

The president also told media before boarding Air Force One at Joint Base Andrews that there will be “no extention” for the Sept. 20 sale deadline he set for Chinese-owned company Tiktok.

In August, Trump issued an executive order to ban the video-sharing mobile application if its US operations is not be sold to an American company. So far, Microsoft and Oracle have shown interest.

While Trump argues TikTok poses a national security threat to the US by sharing American users’ information with Chinese government, Tiktok’s parent firm ByteDance denies that, adding its user data is stored outside China.

Tiktok was downloaded 315 million times in January-March 2020, more than any app in a single quarter in history, and 26 million times in August alone when it generated a $3 million revenue that month, according to analytics company Sensor Tower.