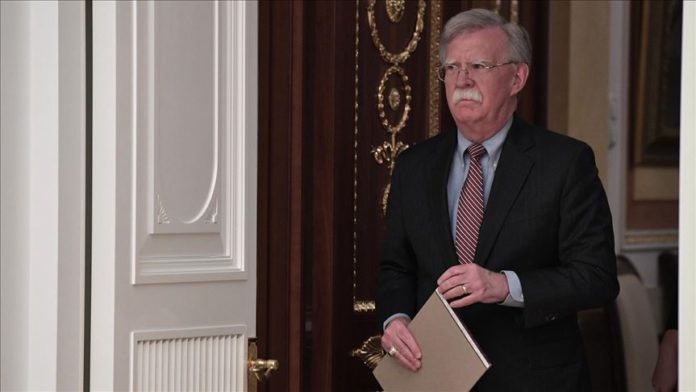 The Trump administration sued former National Security Advisor John Bolton on Tuesday in a bid to prevent the publication of his forthcoming tell-all book on allegations it contains classified information.

The 27-page filing alleges that Bolton’s book, The Room Where It Happened: A White House Memoir, contains “significant quantities of classified information that it asked Defendant to remove.”

“The United States is not seeking to censor any legitimate aspect of Defendant’s manuscript; it merely seeks an order requiring Defendant to complete the prepublication review process and to take all steps necessary to ensure that only a manuscript that has been officially authorized through that process—and is thus free of classified information—is disseminated publicly,” it says.

Bolton’s book was supposed to be published in March, but its release was twice delayed by publisher Simon & Schuster. It is scheduled for release next Tuesday.

“I told that to the attorney general before. I will consider every conversation with me as president highly classified,” he said. “That would mean that if he wrote a book, and if the book gets out, he’s broken the law. And I would think that he would have criminal problems. I hope so.”

The Justice Department is seeking to have a judge order Bolton to “instruct or request his publisher” to further delay the book’s release until the security review process is completed as well as ask Simon & Schuster “to retrieve and dispose of any copies” that currently exist “in a manner acceptable” to the government.

It is also asking a judge to “impose a constructive trust” that would allow the government to receive any funds Bolton receives from the book.

Bolton earlier Tuesday retweeted a message from the American Civil Liberties Union, warning any attempts to block publication of his book “are doomed to fail.”

“50 years ago, SCOTUS rejected the Nixon administration’s attempt to block the publication of the Pentagon Papers, establishing that government censorship is unconstitutional,” the rights group said.

It was referring to the Supreme Court’s landmark 1971 ruling allowing the publication of the Pentagon’s previously secret history on US involvement in Vietnam.