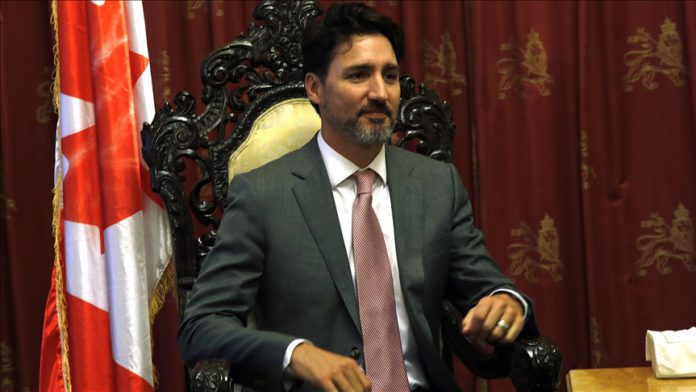 Canadian Prime Minister Justin Trudeau lashed out at Beijing Friday after the trial of Michael Spavor on espionage charges was conducted in secret with no announced verdict.

“Completely unacceptable,” Trudeau said, speaking in Ottawa where he was slated to give a live press conference to update Canadians on COVID-19.

As the trial was taking place, diplomats from various countries – the US, Netherlands, UK, France, Denmark, Australia, Sweden and Germany – demonstrated solidarity with Canada and stood across the street from the Chinese courthouse.

A Canadian official knocked on the courthouse door but was refused admission.

“We are disappointed in the lack of access and the lack of transparency,” said Jim Nickel, charge d’affaires at the Canadian embassy in China.

Canadian officials were also not allowed access to Spavor – the last time was early February.

The other Canadian Michael Kovrig who also faces espionage charges, is slated to go on trial Monday.

“We stand shoulder-to-shoulder with Canada in calling for their immediate release and continue to condemn the lack of minimum procedural protections during their two-year arbitrary detention.”

Trudeau said at the press conference Friday that “our top priority (is) securing their release.”

The two Michaels, as they are often referred to, were taken into custody by the Chinese government on Dec. 10, 2018, a week after Canada, acting on an extradition treaty request by the Americans, detained Huawei’s chief financial officer Meng Wanzhou. She was arrested at a Vancouver airport while changing flights. The Americans wanted her sent to the United States where Meng was charged with breaking US sanctions against Iran.

The Chinese government lambasted the move and demanded her immediate release, which Canadian officials refused. The imprisonment of Korvig and Spavor was widely viewed as retaliation for the Meng detention. She is out on bail while her extradition hearings continue in a Vancouver courtroom.