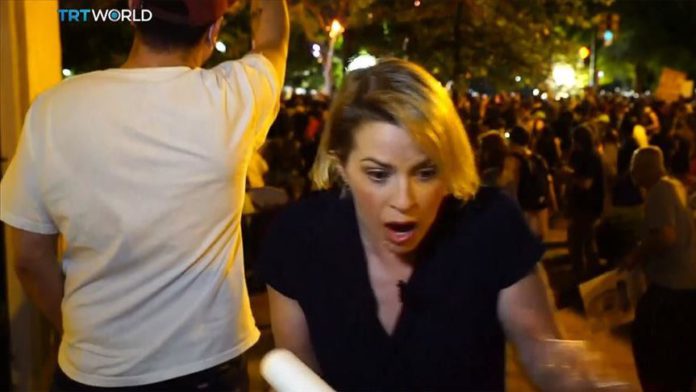 As the protests in the US against the killing of George Floyd entered its eighth day, TRT World journalists came in the line of fire in the states of Washington and Minneapolis.

Police on Wednesday used rubber bullets to disperse protests against the killing the 46-year-old black man by a white police officer.

Sally Ayhan, the Washington correspondent of TRT World, was injured in the chest and leg by plastic bullets during live coverage.

Another correspondent, Lionel Donovan and cameramen Barbaros Sayilgan from Minneapolis also came under attack. Donovan was injured when a bullet targeted his groin.

The protests have been raging in the US since a video went viral on social media showing Floyd, an unarmed black man, being pinned down by Derek Chauvin, a white police officer, as he was being arrested in Minneapolis, Minnesota on May 25 after reportedly attempting to use a counterfeit $20 bill at a local store.

In his White House remarks on Monday, US President Donald Trump threatened to deploy the military unless state governors stopped the violent protests.

Trump said he was recommending that governors deploy the National Guard in sufficient numbers to “dominate the streets.”