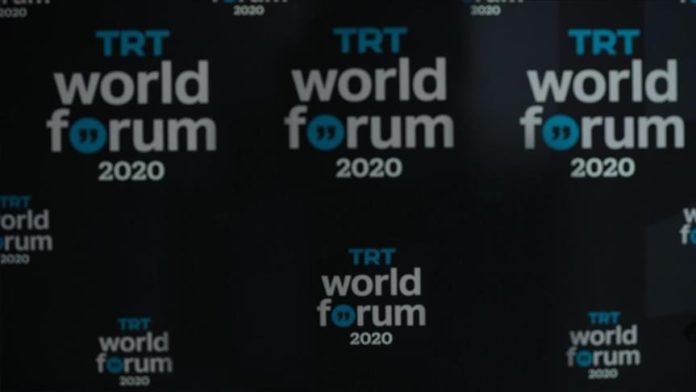 The priority of Turkey’s state broadcaster TRT throughout the novel coronavirus pandemic has been to obtain accurate information from primary sources, the channel’s chairman and director-general underlined on Tuesday.

“We gave accurate information from the first sources from the doctors and ministers — the Ministry of Health — so that people tune into the public service media to get enough information,” Ibrahim Eren told the first public session Infodemic: How the International Media Impacted the Pandemic as part of the fourth TRT World Forum that is being held virtually due to the outbreak.

Eren said fake news was one of the biggest challenges for the media during the pandemic and cited UN Secretary-General Antonio Guterres’ remarks: “Our common enemy is COVID-19, but our enemy is also an infodemic of misinformation.”

Stating that the pandemic affected media organizations in many ways, Eren said they adopted a multi-layered approach over the course of this process.

“[The approach] consists of securing our most important assets, namely our journalists and staff,” he said, adding that it also involved continuing to attract audiences through quality and innovative communication practices.

He underlined that while some of the staff had to work from their homes, those who had to go to the field took “extreme precautions” to keep both themselves and their colleagues safe.

Noting a shift in their focus, Eren said issues of health, sports and diet have become their main focus as these were topics that attract people confined to their dwellings due to the pandemic.

‘Focus was on negative news’

Mottaghi, for his part, said the pandemic did not change the responsibilities of broadcasters to inform people.

Stating that competition existed everywhere and every country has the right to disseminate information, Mottaghi said: “Fake news is not a new phenomenon and it is the role of public broadcasters to tackle that, to tell the public what is fake and not fake.”

He said that to understand how a country is faring under the coronavirus, its population and number of infections should be taken into account, adding that some politicians and policymakers, including in Western countries, ignored this fact.

Vietnam and New Zealand have done a better job than many other countries, he said, however adding: “If we look at the countries with dense populations, we need to look at numbers overall to know how people have been impacted.”

Pointing to the general focus on negative news, Mottaghi said there was no talk about the methodology of containing the virus in Vietnam, for example, where death rates were very low.

“Unfortunately, these good things that we saw in Asia have not been reflected in the mainstream media across the globe,” he said, adding that the situation was similar in Africa.

During the program, the EBU’s Curran also addressed disinformation in the media and said a lot of it was “deliberate and dangerous.”

He said some senior political figures and celebrities with large audiences also took part in misinformation that contradicted with what scientists have suggested.

“I believe everyone in public service media has stepped up and the public has responded — trust levels are up and audiences have increased,” he said.

Noting that the case and death numbers could be misleading in showing the actual situation in a country, Curran said the issue was “incredibly complicated.”

“Some numbers are missing, the number of people who have died of other diseases in this period, of economic effects, and we will not know those for a long time,” he said.

Curran also took note of different opinions concerning vaccines, saying: “You have scientists who have one perspective, and the other side is a minority who are skeptical. So, we have to pursue balanced and impartial reporting.”