South Africans are mourning the death of Zulu King Goodwill Zwelithini who passed away Friday after weeks of hospitalization. He was 72.

The king was admitted to hospital last month for diabetic complications.

Zwelithini was the king of the Zulu nation, the country’s largest ethnic group, and was one of the most influential traditional leaders. However, in modern South Africa, kings play only ceremonial, traditional and spiritual roles.

South African President Cyril Ramaphosa expressed grief over the king’s death, saying: “This sad news came at a time when we had all been hopeful that His Majesty was recovering well in hospital where he had been for the past few weeks.”

“The king will be remembered as a much-loved, visionary monarch who made an important contribution to cultural identity, national unity and economic development in both the KwaZulu-Natal province and the country as a whole,” Ramaphosa added.

The government in KwaZulu-Natal province, which falls within the jurisdiction of the Zulu Kingdom, announced in a statement it has cancelled all activities which had been planned for Friday after the death of King Goodwill KaBhekuzulu.

Former African Union Commission Chairperson and current Minister of Cooperative Governance and Traditional Affairs Nkosazana Dlamini Zuma said: “We are very sad and shocked at the passing of King Goodwill Zwelithini kaBhekuzulu. King Zwelithini was the king I worked with as part of my responsibility in the government.”

She said the king played a good role in mobilizing communities to fight HIV/AIDs in the country. ​​​​​​​ 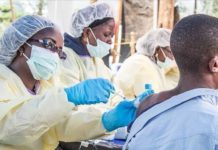 Ethiopia, Egypt to meet in Washington over dam dispute