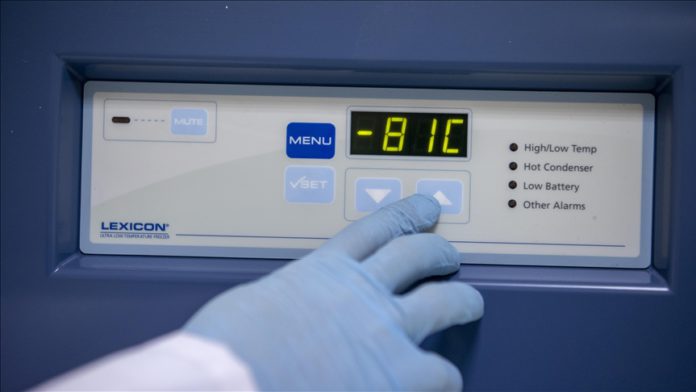 Clinical trials in Turkey involving the administering of first doses of a virus-like particle (VLP) based locally produced COVID-19 vaccine on volunteers have been completed, and if there are no setbacks, administering of the second doses will be completed in the first week of May, a doctor told Anadolu Agency on Thursday.

Fevzi Altuntas, chief physician at the Ankara Oncology Training and Research Hospital in the Turkish capital, said vaccine studies on the coronavirus had started about a year ago.

“We finished the first doses. We started administering the second doses. It is also proceeding quickly. If there are no setbacks, we will have completed these doses in the first week of May,” he said.

Noting that Dr. Mayda Gursel and Dr. Ihsan Gursel have produced and developed the local vaccine, Altuntas thanked the two scientists for all their contributions.

Altuntas said they received official approval from the Health Ministry’s Medicines and Medical Devices Institution as of March 19, adding the first volunteers had been included in the clinical study starting from March 26.

He said people over the age of 18 who do not have any health problems and have not had COVID-19 before can volunteer for the vaccine study.

Altuntas said they administered the vaccine in two doses and monitored its safety for six months, stressing that the first 24 hours in this process are very valuable, so the volunteers are closely monitored both by physical examination and in the laboratory.

No serious reactions after 24 hours

Altuntas said one of their volunteers in the vaccine trials was Industry and Technology Minister Mustafa Varank.

Mentioning that both Varank and Hasan Mandal, president of the Scientific and Technological Research Council of Turkey (TUBITAK), closely monitored the studies, Altuntas said “they were both suitable for the clinical studies as they tested negative. So they stayed here for 24 hours and witnessed nothing serious after the process.”

“Varank told us he experienced some aching in his arm, but Mandal did not tell us anything,” he added.

Altuntas, who said the vaccine is an innovative product, noted that when a mutation develops, the vaccine can be designed according to it and adapted quickly.

“If there are no setbacks, we will have finished the 21st day of jabs in the first week of May,” he stressed.

“You may be wondering what our observation is in this process. I can say that there were no serious reactions that we saw in its reliability. I can say that we did not encounter any serious signs and symptoms in our follow-up.”

Afterwards, Phase 2 will begin, and over 200 volunteers are needed, said Altuntas.

“We will start the Phase 2 studies of the VLP vaccine in the first week of June. We are already trying to prepare our volunteers.”

He said the process the world has been going through is a globally tiring one and invited anyone who fits their conditions to be volunteers.

Asked when the vaccine could be released, Altuntas said: “If all goes well, it could be ready for citizens’ use in the autumn.”

“We can’t give exact dates because it’s a little bit about volunteers joining in, volunteers supporting it,” he added.

“The VLP vaccine is an innovative vaccine. After all, we have compared the four antigens of the virus to the non-infectious state of the virus using synthetic recombinant technology.”

He also underlined that the vaccine can be designed to work against any new virus variant, including the already existing ones.