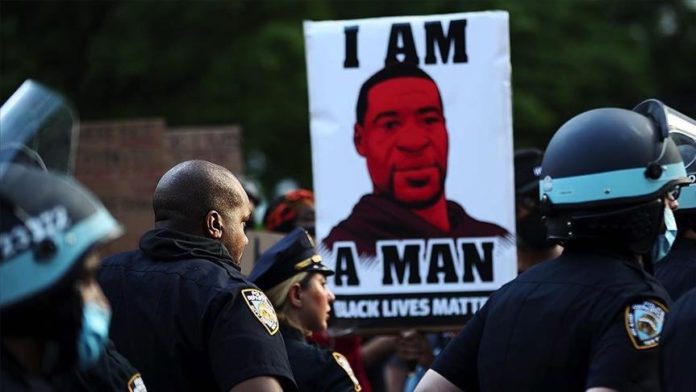 Police guarding the building in downtown Minneapolis, Minnesota where jury selection begins in the trial of Derek Chauvin don’t have to wonder if protestors might show up.

The city spent about a million dollars to surround the building like a fortress with 15-foot high metal fencing and barbed wire, and someone already taped a small paper sign on the fence advertising a Black Lives Matter protest bright and early Monday morning, as jury selection begins.

Chauvin is on trial for the notorious death of George Floyd, a Black man who was accused of trying to pass off a counterfeit $20 bill at a convenience store in Minneapolis.

Cell phone video footage of the incident horrified the world: the Minneapolis police officer appeared calm as he knelt on Floyd’s neck for about eight minutes on the street outside the store. Floyd repeatedly uttered the words “I can’t breathe” and then “Mama” until he lost consciousness and died.

His death on that late May day touched off rioting and street protests; entire blocks of businesses were burned to the ground in the city, and protests, mostly peaceful, but some violent, also sprung up across the nation and the world.

Most people in the city can’t even conceive of the possibility that Chauvin might walk away scot-free, but in the neighborhood where Floyd died, nothing short of a second-degree murder conviction will satisfy.

“That’s what I would like to see,” says Pastor Curtis Farrar of Worldwide Outreach for Christ Ministries, a low-slung church that sits across from the spot where Floyd died.

“It means [the jury] have been made aware of the seriousness of the problem we have in this country, which is racism.”

“We need justice,” he added, “and second-degree murder is what that’s all about. [Chauvin] deliberately put his knee on that man’s neck, and he kept it there, and it seemed to all of us that he enjoyed it.”

The spot where Floyd died on the street is now painted with a blue angel and surrounded by a flowered memorial. It’s become a tourist destination, a pilgrimage for people who just want to see the spot where a national reckoning on race began.

The intersection has been blocked off to vehicle traffic by neighbors, and the city hasn’t intervened; Pastor Farrar says it’s become like a “gated community” where police rarely visit and the vibe here is both angry and artsy.

Besides the memorial to Floyd, there are giant murals and graffiti art of his face. There are large sculptures of clenched fists and flowers. Local artists show off their social justice-themed artwork here and there’s a pop-up community library. There are rows of food donated for neighbors in need and occasional live music.

In some ways, the neighborhood is in better shape now than it was before Floyd’s death.

“I think it’s changed for the better in terms of its awareness of our responsibility toward one another,” says Pastor Farrar, “little by little.”

But in some ways, jury selection began months ago.

The court mailed out 14-page questionnaires to hundreds of prospective jurors in the county, asking them things like their opinion on Black Lives Matter and Blue Lives Matter (in support of police). They were also asked not to watch, read or investigate the case any further.

Former Hennepin County chief public defender Mary Moriarty says she’s worried that prospective Black jurors will be eliminated from the pool if they show too much allegiance to Black Lives Matter.

“One of the things that does concern me will be the demographics of this jury,” Moriarty told Minneapolis Fox affiliate KMSP-TV.

In 1992, a nearly all-white jury acquitted four Los Angeles police officers in the infamous beating of a Black man, Rodney King, also caught on video. The acquittal touched off days of rioting that shook the nation.

But during weeks of peaceful protests across the US after Floyd’s death, civil rights leaders noted a sea change: the vast majority of demonstrators were white. On the other hand, national polls show support for Black Lives Matter has dropped since last summer while support for police has inched up

Legal experts say it’s impossible to know fully the internal biases of potential jurors, like buying a box of chocolates and not knowing what’s inside.

And the infamous cellphone video of Chauvin kneeling on Floyd’s neck is already “baked in”; it’s not in dispute by anyone, so jurors will be asked to get inside Chauvin’s mind to determine his motivation at the time. To strengthen their case, prosecutors will call witnesses to testify to Chauvin’s alleged rough treatment of others, both as a police officer and a security guard. The defense will most likely point to drugs in Floyd’s body at his arrest and his pre-existing health conditions.

Finding an impartial jury will be difficult. Besides the cellphone video, there are reminders everywhere in Minneapolis of the fallout: piles of riot rubble still dot the city, and the police department has faced a wrenching reckoning, from calls to defund the department to resignations and low morale.

When asked if she felt the city would accept anything short of a second-degree murder conviction, she paused.

“The only thing that’s going to satisfy people here is justice, and everyone has different opinions about what that looks like. It feels like the value of Black life is what is on trial.”

Regardless of the outcome, she said, “Ultimately there needs to be [societal] change from the ground up.”

And on the chance that Chauvin might be acquitted of all charges?

“I got my ticket,” chuckled Pastor Farrar. “I’m leaving.”

Trump warns Iran of severe retaliation if US attacked