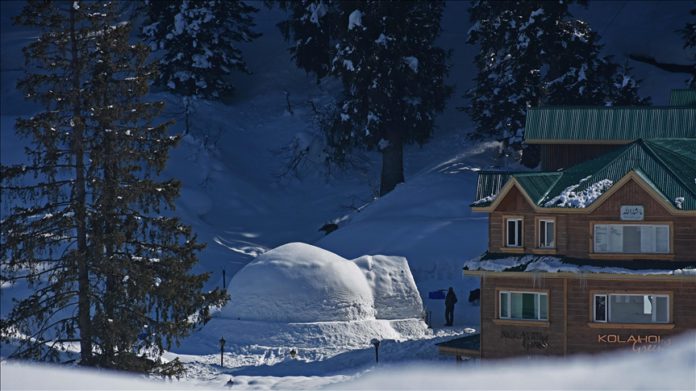 From the mountainous slope overlooking the world’s most dangerous and highly militarized border called Line of Control (LoC) — dividing Jammu and Kashmir between India and Pakistan — it was an incredible sight on July 21, on the eve of Eid-ul-Adha, the Muslim festival.

Rival soldiers wearing white gloves were shaking hands and exchanging sweets on the narrow rope bridge over the roaring Neelam or Kisanganga River at Teetwal. Just few months ago, these soldiers were targeting each other with mortars and shells.

The small village of Teetwal across the LoC on the Indian side in Karnah tehsil and an Indian military post was visible from the slope.

Redbrick houses with wooden rooftops and people walking on a dirt track were visible across the military line.

Noted Urdu writer Saadat Hasan Manto had immortalized this village by authoring his famous short story The Dog of Teetwal, where he described how soldiers bring the war to peaceful mountains and innocence of nature.

“The men (soldiers) cannot enjoy the pleasant surroundings because they are not there to enjoy life but to kill,“ he wrote half a century ago.

But the ceasefire since February, which has silenced the guns has kicked tourism in Neelam Valley, the 144 kilometers (89 miles) remote mountainous northern strip of Pakistan-administered Kashmir or Azad Jammu and Kashmir (AJK).

Ambitious hikers have returned by pitching their tents at a small camping site near historic Sharda town, which houses an ancient seat of learning. Crammed in colorful sturdy jeeps, groups of restless tourists are seen setting off to a rocky and curvy track that leads to the tantalizing high altitude Ratti Gali Lake. Others are proceeding to the panoramic Arrang Plateau in Kail town. Yet another convoy was leading to striking Shounter Valley.

The area running parallel to the Kaghan Valley of Pakistan from north and Kupwara and Bandipora districts of Indian-administered Kashmir from the south, hosts snow-covered peaks, some over 4000 meters above sea level.

The Himalayan region, which has been a bone of contention between India and Pakistan since the two countries partitioned in 1947, following the end of the British colonial era is a treasure trove for nature lovers.

Locals say the picturesque strip, along the 740 kilometers (460 miles) LoC was blazing with guns till February.

The fascinating five-hour drive on Neelam Highway– the only road that connects the region with Muzaffarabad, the capital of AJK is dotted with snow-capped mountain peaks, and pine and deodar forests.

Some young boys who were going to play a cricket match against another village stopped my vehicle and asked for a lift while descending from Kail. Volleyball is another favorite sport in the remote region.

Many villages like the Keiran are divided in the middle by the LoC. The government has begun constructing a road from Kaeran to Sharda following the ceasefire.

Behind the wooden structures along the road are numerous orchids, the backbone of the Kashmir economy. Those who were involved in honey production, have also resumed their business following the cease-fire.

The 20 km (12mi) road from Sharda town to Kail is dotted with small honey production units overlooking the Neelam River.

“There was no tourism or business here before the ceasefire. Shelling and firing had been a routine affair,” Sardar Aurangzeb, a local journalist, told Anadolu Agency.

According to Khawaja Ikhlaq, a resident of Khawaja Sri village, half of the nearly 200,000 population of Neelam valley had migrated to Muzaffarabad and the adjoining cities of northeastern Punjab province due to shelling and firing from across the border in different phases over the past decade.

“Most of them have returned and resumed their closed businesses, including agriculture,” Ikhlaq said.

Taking a short break from serving guests at a roadside motel in Sharda town, Maratib Ali narrated his unforgettable ordeal, when he was held in cross-firing between soldiers of India and Pakistan.

“Death was inches away. I had convinced myself that it was the last day of my life,” said Ali, 28, who works as a waiter and part-time cook at a motel.

“The shell fell with a deafening sound in the middle of the site where we were constructing a bunker for the family. There were screams, fire, and smoke everywhere (around). I do not know how did I escape from the sure death. All I remember is that I started running in panic towards a Pakistan army bunker,” he said.

The people, mainly children are complaining of psychological ailments because of living in a dangerous zone that witnesses firing and shelling almost on daily basis, said Mushtaq Shah, a migrant from Srinagar, the capital of Indian-administered Kashmir.

“We sincerely pray that may this ceasefire lasts long. We want to live in peace,” he said.

On the foothills of lofty mountains, Muzaffarabad, located at the confluence of Jhelum and Neelam rivers is bubbling with activity. It is hard to imagine that this bustling city was once razed to the ground by a powerful earthquake in 2005 that killed 80,000 in the region. The city was turned into rubble.

With the help of many NGOs and the help of the Turkish government as well, the city is back to life. Dotted by pencil minarets and flat domes, the imprints of Turkish liberal aid that helped to rebuild the city, post-2005 devastating earthquake, is quite visible. The Ottoman-style mosque has emerged, one of the startling features of the landscape of this tiny city, housing a population of 150,000.

“Ankara’s support in the rebuilding of the earthquake-hit areas, particularly Muzaffarabad has been enormous. It not only provided financial support but also lent technical assistance to ensure the sustainability of new infrastructure in case of another natural calamity strikes,” said Mohammad Khizr, a senior journalist.

Reconstruction is still under process

Although it has been over 15 years, the reconstruction process is still in process. Over 1,500 schools across the valley are still dysfunctional due to incomplete reconstruction.

Unlike the comparatively homogeneous nature of Kashmir Valley across the LoC under Indian administration, the AJK is vastly heterogeneous, inhabiting scores of ethnicities, locally known as biradaris.

Whether it is elections or the fight for resources issue, the loyalties to their biradaris reign supreme in the minds of locals.

Seven major castes or biradaris, Gujjar (Chaudhry), Jaat, Sudhan, Rajput, Syed, Khawaja, and Awan have been dominating the socio-political scene in the region.

In the erstwhile state of Jammu and Kashmir which existed before 1947 Muzaffarabad and the Neelam areas were part of the Kashmir Valley region. The remaining areas, that now form part of AJK were extensions of the Jammu region.

Culturally, Muzaffarabad and Neelam valley are close to Kashmir Valley.

Talking about Kashmir without its trademark phern (cloak), kasaba (headgear for women) and pashmina shawl are like writing about a male deer skipping his beautiful horns. Despite everything changing in the whirl of time, the pheran and kasaba have remained a tradition in the region.

Made of pure wool with intricate hand embroidery, phern is the traditional outfit for both males and females in the Kashmir Valley.

The famous headgear of the Neelum valley is called kasaba in the local language.

“Kasaba is worn by the elder lady of the house. It is also stitched and embroidered for brides in colorful patterns,” said Rukhsana Khan, head of the Art and Design department of the University of Azad Jammu and Kashmir.

The colorful embroidered casual caps are made and used by young ladies. The caps used by older ladies are simple in style with the collage of cloth and threads.

According to Khan, famous Chinese tourist Huien Tsang who visited the region in the seventh century praised the dresses of the Kashmir Valley and described them as attractive in coloring, designing, and the use of pattern.

She said that male figures in the sculptures and brick tiles unearthed from Harwan village near Srinagar dating back to the third century BC have been found wearing fitted trousers or pajamas and Turkoman cap. The costumes of the figures reflect the influence of Centre Asian culture on Kashmir and its adjoining regions.

“There is a continuity of these traditional crafts that inhabitant of the valley is still using with little alterations,” Khan said.

Central Asia is also home to Sufi saints followed and revered in Kashmir. Mir Syed Ali Hamadani’s grave lies in the Kulub province of Tajikistan. He is credited with bringing Islam to Kashmir, which is perhaps the only region in South Asia, where upper caste Hindus converted to Islam in large numbers.

Another most-followed saint, 14th-century Bahauddin Naqshband — founder of Naqshbandi order — is buried in the outskirts of the city of Bukhara.