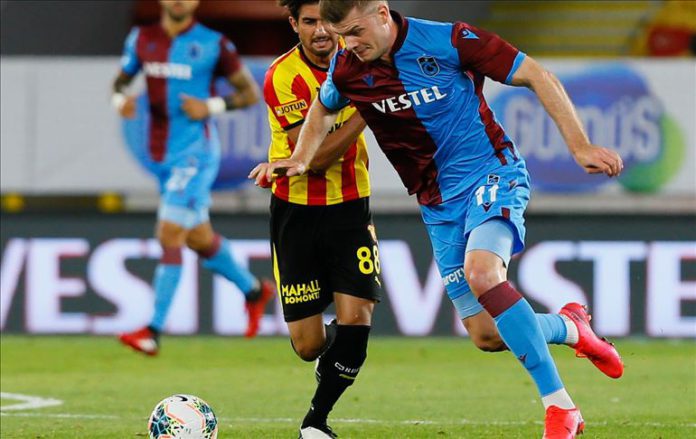 The Super Lig leaders Trabzonspor won against Goztepe 3-1 as the Turkish top-flight football league began with coronavirus measures on Friday.

Visitors Trabzonspor took the lead as Nigerian forward Anthony Nwakaeme scored by header in the 16th minute, 1-0. He was unmarked in the penalty area.

Near the end of the first half Trabzonspor’s Brazilian winger, Guilherme was sent off after a foul against Goztepe midfielder Andre Castro.

So visitors were down to 10 men.

In the early minutes of the second half, Trabzonspor were awarded a penalty as Norwegian forward Alexander Sorloth was brought down in the area.

Similar to Trabzonspor, Goztepe were given a penalty kick as English forward Cameron Jerome was fouled.

Goztepe narrowed the gap to one after Turkish-Belgian defender Alpaslan Ozturk scored from the white spot in the 57th minute, 1-2.

This goal encouraged the home team but in 84th minute, Trabzonspor made the score 3-1.

Trabzonspor midfielder Abdulkadir Omur had the ball while he was entering the Goztepe penalty area on a counter-attack.

Goztepe goalkeeper Beto left his goal to parry the ball but it was deflected by Omur towards the Goztepe goal.

Meanwhile, the Turkish defender of Goztepe, Berkan Emir ran after the ball but was unable to clear it from the goal line, scoring an own goal.

After the goal Omur was subbed out due to injury caused by collision with Beto.

The late goal clinched the victory for Trabzonspor.

So Trabzonspor, who are on the top of the Super Lig, boosted their points to 56.

Everyone outside the pitch in Gursel Aksel Stadium — including police forces — wore face masks as part of the coronavirus measures.

Visitors Kayserispor broke the deadlock in the 59th minute as midfielder Bernard Mensah from Ghana scored a freekick goal.

This goal upset Fenerbahce as in the first half they were reduced to 10 men, as Turkish midfielder Ozan Tufan was shown the red card after a hard tackle.

Fenerbahce came back near the end of the match with consecutive goals.

Yellow Canaries’ forward Vedat Muriqi equalized with a penalty kick in 87th minute and Brazilian midfielder Luiz Gustavo scored the winning goal for his team just a minute after the equalizer, 2-1.

As the matches in Turkey were held behind closed doors, cardboard fans filled the Fenerbahce’s Ulker Stadium.

Each team in Super Lig is able to substitute five players during a match, one of the measures for the fight against the COVID-19.