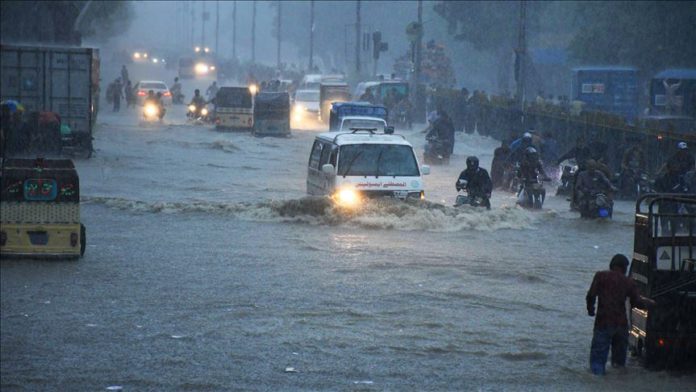 The fresh rain spell submerged the city’s major thoroughfares and low-lying areas, forcing the administration to call in the army and paramilitary Rangers to rescue the stranded people in several localities.

The massive downpour struck Karachi on Tuesday night, which lasted next 14 hours with short intervals.

At least five people were killed, mostly by electric current and drowning in different parts of the city on Wednesday alone, raising the death toll to 16 over the past three days, local broadcaster Dunya News reported.

Hundreds of vehicles were seen stuck in the middle of the submerged roads as people waded through knee-deep rainwater to reach their destinations.

According to the metrological department, the city received 120-millimeter rains until Wednesday afternoon.

Footage aired on Dunya News showed armed forces personnel and civilian rescue agencies’ workers using rubber boats to rescue the stranded people in northern and western districts of the port city, which according to Meteorological Department, has received 120% more rains in August compared to the last year.

Authorities have appealed to the citizens to say indoors as more rains are expected during the next 24 to 48 hours.

At least 99 people have been killed and over 40 others injured during the ongoing monsoon spell since June across the country, according to the National Disaster Management Authority, a state-run coordinating agency.