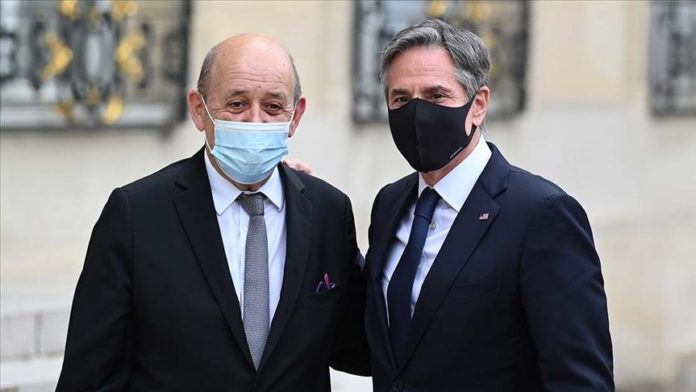 US Secretary of State Antony Blinken and French Foreign Minister Jean-Yves Le Drian discussed the situation between Russia and Ukraine in a phone call Sunday.

They spoke about the ongoing efforts by NATO allies, European Union partners, G7 members and other partners to address Russia’s continued military buildup on Ukraine’s borders and the importance of continuing to support Ukraine’s sovereignty and territorial integrity, the US State Department said in a statement.

They also discussed joint efforts to strengthen NATO’s eastern flank and to ensure that Russia understands the high costs it would incur if it were to invade Ukraine further, it said.

Moscow and Kyiv have been locked in conflict since hostilities in Ukraine’s eastern Donbas region broke out in 2014 after Russia annexed the Crimean Peninsula.

The US and its allies have warned of an imminent attack and threatened Russia with “severe consequences.”

Moscow, however, has denied that it is preparing to invade Ukraine and said its troops are there for exercises.

Efforts by world leaders including Turkish President Recep Tayyip Erdogan are afoot to resolve the row peacefully. Turkiye has offered to host a peace summit between Russian President Vladimir Putin and his Ukrainian counterpart Volodymyr Zelensky.