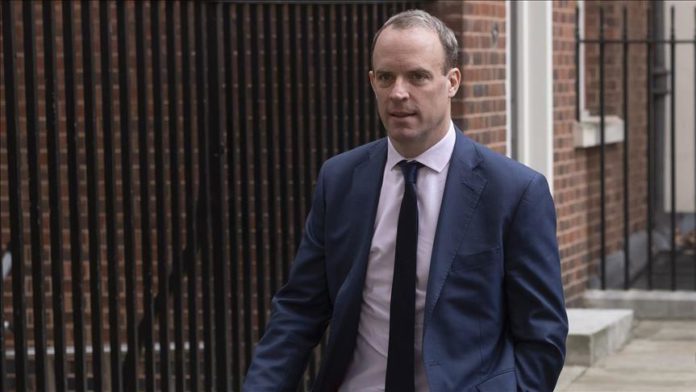 British Foreign Secretary Dominic Raab flew to the US on Wednesday to deal with the fallout over his government’s UK Internal Market Bill that it has admitted breaks international law.

Senior Democratic lawmakers have said they will block any future US-UK trade deal if it threatens the Good Friday Agreement.

Raab met with his US counterpart Mike Pompeo, and the two discussed China and Iran.

He then met with pro-Irish Democrats, including House Speaker Nancy Pelosi and the chairman of the House Ways and Means Committee Richard Neal, who oversees trade deals.

A joint statement by four senior congressmen said the proposed UK bill “could have disastrous consequences for the Good Friday agreement and the broader process to maintain peace on the island of Ireland.”

“Many in the Congress and the US consider the issue of the Good Friday Agreement and a potential US-UK free trade agreement are inextricably linked,” their statement added.

The statement came from Neal, as well as Eliot Engel, the head of the Congress’ Foreign Affairs Committee and William Keating, the chair of the House sub-committee on European affairs, as well as Peter King — the only Republican among the four signatories — but with all of them having significant Irish populations in their constituencies.

The Republic of Ireland has lobbied the US Congress hard over the issue.

Joe Biden, the Democratic presidential candidate, is himself Irish-American, and a staunch advocate of the Good Friday Agreement.

The UK Internal Market Bill unilaterally overrides sections of the Withdrawal Agreement with the EU, a move that breaks international law.

It seeks to override a potential border in the Irish Sea between Great Britain and Northern Ireland in the event of no-deal.

The issue is that this will lead to a hard border on the island of Ireland in the event of no-deal, and the hard border was dismantled by the Good Friday Agreement.