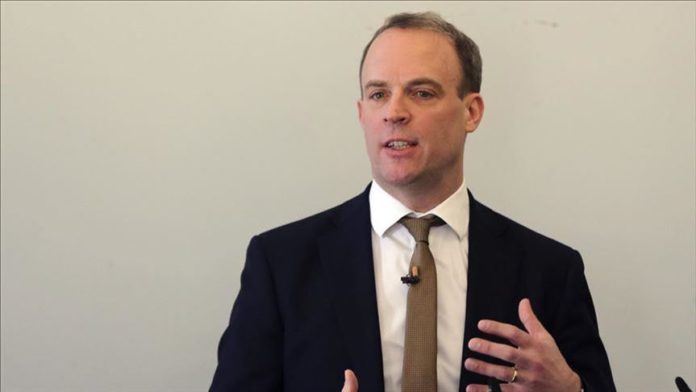 British Foreign Secretary Dominic Raab was interviewed by the US think tank the Atlantic Council, where he was questioned about Brexit, the controversial UK Internal Market bill, US-UK trade negotiations, as well as British foreign aid.

Raab is in the US dealing with the fallout over his government’s Internal Market bill that breaks international and risks the Good Friday Agreement that brought peace to Northern Ireland. The US is a guarantor of the agreement.

The event on Thursday with the Atlantic Council was titled Charting a Path for Global Britain: A Conversation with UK Foreign Secretary Dominic Raab.

“We want to leave the EU but be better neighbors and friends,” Raab said, speaking about Brexit. “We’re leaving the political club, we’re not leaving Europe. I think geographically, that’s pretty fixed.”

On US concerns over the recent Internal Market Bill, he said: “We understood that the Irish caucus on the Hill, the Irish communities here would be conscious and concerned about this, so it’s really important to reach out.”

He said the UK was committed to everything in the Withdrawal Agreement with the EU, and that both the integrity of the EU single market and UK internal market had to be protected.

“What we can’t have is the EU trying to press on this, what they I think perceive as a point of vulnerability with the UK, in order to erect a regulatory border down the Irish Sea. So we’ve taken a reserve power, it’s a defensive power, it’s proportionate, but its precautionary only. I hope we don’t need it,” he noted.

“I have been very candid with all of my friends out here on whichever side of the political aisle. We’ve been really clear, we’ve given the absolute unconditional commitment, no hard border, no extra infrastructure that will be erected on the Northern Ireland-Republic of Ireland border,” he said.

“You haven’t heard that from the EU. So I’m just gently encouraging … our friends here to ask the same questions to the EU, because I believe we could alleviate all that uncertainty in the blink of an eye if the EU made the same unilateral commitment that the UK’s made.”

Raab stressed that the US and UK economies were “very complimentary,” but said: “We’re very clear on our side, we’re not going to reduce in any way our regulatory standards.”

His interviewer mentioned that the US secretary of state was bullish about the prospects of a US-UK trade deal.

“They’re making great progress,” Raab said, adding: “Whether they can get this done in time for the election, maybe it will be a stretch, but let’s see, let’s go for it.”

He stressed that while of course the EU, US, and China matter, other countries also mattered to the UK, including India, Japan, South Korea, Israel, and Canada.

Raab said Britain was committed to “being a force for good” in the world, and that the UK’s aid budget was “enormous”.

In a move widely condemned by three former prime ministers as well as the aid sector, Britain’s Department for International Development was collapsed into the Foreign and Commonwealth Office to create the new Foreign, Commonwealth, and Development Office.

“I do think it ought to be linked to our values and I do think it should be linked long-term to the UK national interest. So we want to get the most value, have the greatest impact, but also link it to strategy,” Raab said, defending the move.

“I think there was a view amongst the aid world, the last few years you could see it, but it goes back a lot longer, that what you do with your aid is somehow a moral dimension that is separate from your national interest. I think that’s a mistake.”

The UK takes over the presidency of the G7 next year amid the continuing fallout from the global coronavirus pandemic, and will also host a summit on the climate crisis.

Foreign tourists to pay for COVID-19 tests to enter France