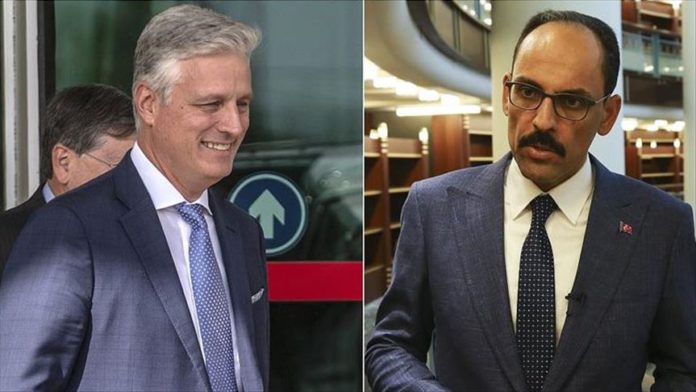 The two officials discussed various issues including recent developments in Syria and Libya, the fight against COVID-19, the fight with terrorism, and recent protests in the US.

Kalin and O’Brien agreed on the need to stop illegal attacks by Khalifa Haftar in Libya, a warlord who has violated all cease-fire agreements, including the Berlin process initiated this January.

Following the ouster of Muammar Gaddafi in 2011, Libya’s new government was founded in 2015 under a UN-led political deal.

The Libyan government has been under attack by Haftar’s armed forces since April 2019.

Kalin and O’Brien also reiterated their consensus about speeding up the constitutional process in Syria, and continuing the cease-fire in Idlib, northwestern Syria, a war-torn area covered by a de-escalation zone against attacks.

In the phone call, Kalin shared Turkey’s experiences in the fight against coronavirus, and the two sides vowed to boost cooperation on healthcare issues.

The officials ended the call by discussing last week’s killing in police custody of African-American George Floyd, related protests in the US, racism, and vandalism.