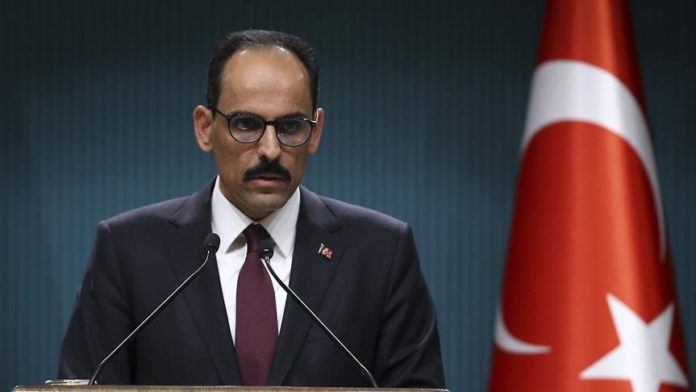 In a phone call, Turkey’s presidential spokesman and the US national security advisor on Tuesday discussed bilateral ties, regional issues, and the fight against COVID-19, an official statement said.

Ibrahim Kalin and Jake Sullivan spoke about the Turkish-US relations along with regional issues, including Syria, Libya, Iraq, and the COVID-19 pandemic, said a Turkish presidential statement.

The duo agreed that close alliance relations between Turkey and the US need to proceed on a basis of mutual respect, focusing on common interests and strategic priorities.

During the conversation, the importance of joint efforts to resolve areas of disagreement between the two countries such as the Russian S-400 defense system and F-35 fighter jets through constructive engagement was stressed.

In April 2017, when its protracted efforts to buy Patriot air defense systems from the US proved fruitless, Turkey signed a contract with Russia to acquire the S-400 system.

US officials have voiced opposition to its deployment, claiming it would be incompatible with NATO systems and would expose F-35 jets to possible Russian subterfuge.

Turkey, however, stressed that the S-400 would not be integrated into NATO systems and poses no threat to the alliance or its armaments.

Kalin underlined Turkey’s sensitivity and determination on the need to fight all terror groups including the YPG/PKK, Daesh and the Fetullah Terrorist Organization (FETO), adding that attacks on civilians in Syria should be stopped at a time when the political process and constitutional work to ensure lasting peace and stability in the country needs support.

In its more than 35-year terror campaign against Turkey, the PKK — listed as a terrorist organization by Turkey, the US, and the European Union — has been responsible for the deaths of at least 40,000 people, including women, children, and infants. The YPG is the terrorist PKK’s Syrian branch.

The US has supported the terrorist YPG/PKK in northern Syria, claiming it is an ally against Daesh/ISIS. Turkey has strongly objected, saying using one terrorist group to fight another makes no sense.

FETO and its US-based leader Fetullah Gulen are accused of orchestrating the defeated coup of July 15, 2016, which left 251 people martyred and 2,734 injured.

Turkey has long faulted the US for its refusal to hand over Gulen to face justice in Turkey.

Turkey, US pleased with developments in Libya

Both officials also expressed their pleasure over progress in the political process and stabilization in Libya after the UN-recognized Government of National Accord in Libya won a vote of confidence.

According to the UN-led roadmap for the Libyan Political Dialogue Forum, President Mohamed Menfi, Prime Minister Abdul Hamid Dbeibeh, and the incoming administration are expected to lead the country to elections by Dec. 24, 2021.

On Feb. 5, Libyan delegates elected Menfi to head the three-member Presidential Council and Dbeibeh as the new prime minister.

Dbeibeh’s government on March 10 won a vote of confidence with 132 votes of the 133 lawmakers who attended the session.

During the phone call, the officials underlined that efforts to prevent all kinds of violence against women will continue with determination on a global scale.