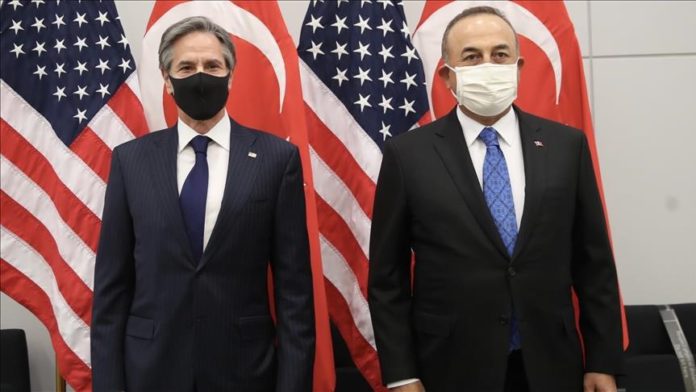 Turkish Foreign Minister Mevlut Cavusoglu and US Secretary of State Antony Blinken discussed a range of issues over the phone on Monday, including tension between Russia and Ukraine.

The phone talk came as the US and Russia are set to hold talks regarding the tensions near Ukrainian border next week.

The talks are followed by a meeting of the Russia-NATO Council on Jan. 12 and the Organization for Security and Cooperation in Europe (OSCE) on Jan. 13.

Besides bilateral relations, the two diplomats also discussed the latest developments in Sudan, Ethiopia, and the Caucasus, said a Turkish Foreign Ministry statement.

Meanwhile, the State Department also said that Blinken and Cavusoglu discussed the escalation near the Ukrainian border.

“Secretary Blinken and Foreign Minister Cavusoglu discussed the importance of continued coordination regarding the threat of Russian escalation in Ukraine,” State Department Spokesman Ned Price said in a statement.

Price said they also discussed issues related to the Horn of Africa, Turkiye’s appointment of special Envoy Serdar Kilic to discuss the process of normalization with Armenia, and opportunities to deepen cooperation bilaterally and as NATO Allies to address areas of mutual concern.

Russia has recently amassed tens of thousands of troops near Ukraine’s border. The move has prompted concerns among NATO allies that Moscow could be planning another military offensive against its ex-Soviet neighbor.

The US and its European allies accuse Russia of trying to destabilize the country by providing military support to separatist forces in Ukraine’s eastern regions.

*Servet Gunerigok in Washington contributed to the story.

Turkey calls on all parties in US to use common sense