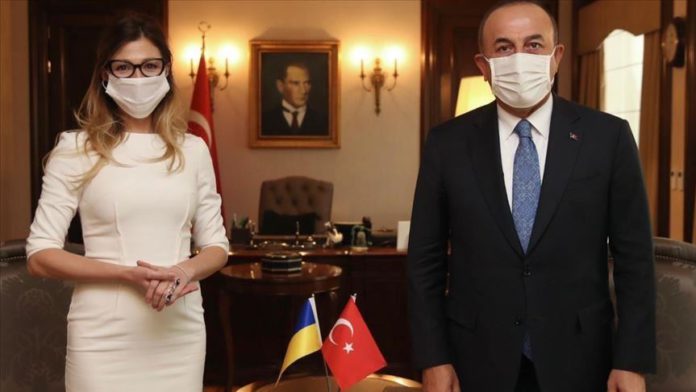 In a Twitter post, Cavusoglu said he hosted Emine Dzheppar on her first visit to Turkey as the Ukraine’s first deputy foreign minister and discussed bilateral relations and regional issues.

He said Turkey welcomes Ukraine’s support for Azerbaijan’s territorial integrity, adding: “As a staunch advocate of the Crimean cause, [Turkey] will always stand by the Crimean Tatars.”

Dzheppar, for her part, said she was pleased to discuss strategic cooperation and regional issues with Cavusoglu, adding Turkey is a “strategic partner”.

Clashes began on Sept. 27 when Armenian forces targeted civilian Azerbaijani settlements and military positions in the region, leading to casualties.

A humanitarian truce was declared on Saturday for the exchange of prisoners and retrieval of bodies from both sides in Upper Karabakh, also known as Nagorno-Karabakh, an internationally recognized territory of Azerbaijan.

Despite the cease-fire, Armenian forces launched a missile strike on Azerbaijan’s second-largest city, Ganja – an area far from the front line – leaving at least 10 people dead and 35 wounded, including women and children.