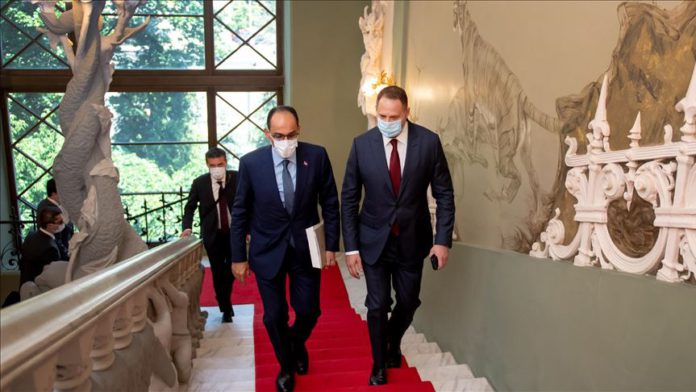 A Turkish delegation headed by the presidential spokesman met top Ukrainian officials in the capital Kiev to discuss a range of issues.

Ibrahim Kalin and other officials were received by Andriy Yermak, head of the Ukrainian president’s office.

They discussed preparations for the forthcoming 12th Turkey-Ukraine Trade and Economic Cooperation Commission meeting, and focused on the negotiation process of a free trade agreement.

The strengthening of bilateral defense cooperation, and relations in the field of defense industry were also on the agenda.

The delegations exchanged views on the roadmap of main priorities in the Turkey-Ukraine cooperation in 2020.

The talks also emphasized the importance given to protecting the rights and interests of Crimean Tatars, and the support of Ukraine’s sovereignty and territorial integrity.

Since then, Crimean Tatars have continued their struggle for Ukraine’s territorial integrity against Russian occupation. They have faced persecution, a situation Turkey has decried.

Turkey, the US, and the UN General Assembly all view the annexation as illegal.