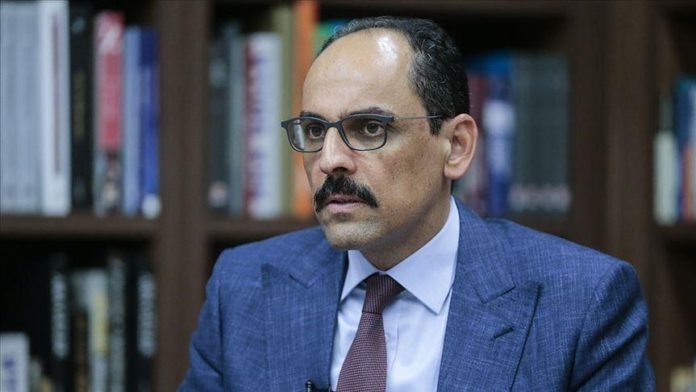 Turkey’s presidential spokesman and the chief French diplomatic advisor on Tuesday dealt with bilateral ties and international issues in a phone conversation.

Ibrahim Kalin and Emmanuel Bonne discussed Turkey’s relations with the EU and France, and the situation in the Eastern Mediterranean, Nagorno Karabakh, Syria, and Libya, according to an official statement by the Turkish presidency.

The re-establishment of relations based on mutual respect and trust was highlighted in the discussion.

The two officials were on the same page with regards to renewal of the 2016 Turkey-EU migration deal and acceleration of ongoing preparations for the new road map.

Kalin and Bonne hailed Libya’s new interim government that is set to run the country until elections slated for Dec. 24, 2021. They called for supporting the legitimate actors in Libya to successfully conclude the political process.

Furthermore, the officials discussed supporting the constitutional committee process to ensure lasting peace in Syria, ensuring free and fair election in the war weary country, and prevention of a new humanitarian catastrophe that could trigger an influx of refugees in the northwestern Idlib city.