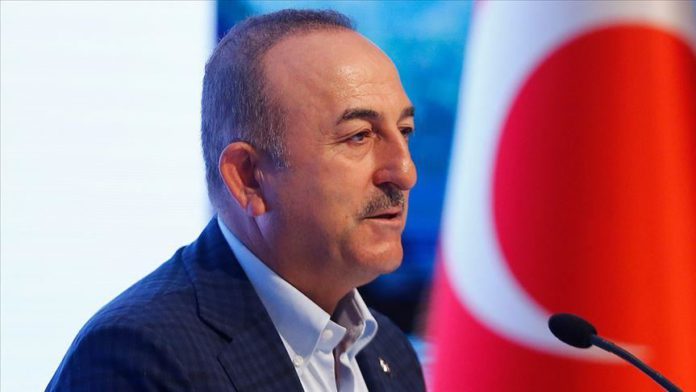 Turkey on Tuesday urged “concrete progress” on a political solution and new constitution for civil war-torn Syria to end the suffering of the Syrian people.

“Turkey continues to lead international efforts to further the political process” in Syria, Foreign Minister Mevlut Cavusoglu told the Fourth Brussels Conference on supporting the future of Syria and the region.

“We have also managed to reduce violence across Syria and start building confidence between the Syrian parties. After the two rounds of Constitution Committee meetings, it is time for concrete progress in the constitutional exercise. We support UN Special Envoy Patterson’s efforts to organize the third round, possibly in August,” he told the meeting, co-chaired by the European Union and the UN, speaking by video link.

The committee adjourned last November amid disagreements between regime and opposition members.

He added: “This is a useless exercise. Turkey will never allow this. Turkey’s genuine desire is to see a stable and democratic Syria that preserves its political unity and territorial integrity.”

Since 2016, Turkey has led a trio of military operations across its southern border to end YPG/PKK terrorist oppression of local Syrians and make the region safer.

In its more than 30-year terror campaign against Turkey, the PKK – listed as a terrorist organization by Turkey, the US, and EU – has been responsible for the deaths of 40,000 people, including women, children, and infants. The YPG is the PKK’s Syrian branch.

Underscoring that the “neighboring countries naturally carry the burden more than anyone else,” Cavusoglu noted Turkey’s efforts, saying the country continues to accommodate all the needs of Syrians without discriminating.

Turkey hosts some 4 million Syrian refugees, more than any other country in the world.

Saying that most of these refugees want to go back to Syria once conditions allow, he said Turkey’s counter-terrorism operations paved the way for more than 400,000 to voluntarily and safely return to northern Syria.

There are 2.7 million internally displaced Syrians in the northwestern Syria, said Cavusoglu, and “they all rely on United Nations cross-border humanitarian aid.”

He called on his counterparts “to extend the UN Security Council Resolution 2504 for another year and keep the Cilvegozu and Oncupinar border gates [connecting Turkey and Syria] in the renewed resolution. The Akcakale-Tal Abyad border gate is also ready to serve in the case of another UN border crossing if needed.”

The UNSC resolution, which allows aid across the Turkish border to people in northwestern Syria, is set to expire on July 10.

With the novel coronavirus also continuing to affect thousands of people across the world, Cavusoglu said the pandemic not only made things worse for Syrians but impacted jobs, livelihoods, and education.

“The continuation of financial support is vital. Resettlement and other third country solutions are essential for providing new windows of opportunity to the most vulnerable refugees,” he stressed.

Turkey has decried the low level of support for Syrian refugees from the world, while it has spent some $30 billion.

Decrying the low numbers of Syrian asylum seekers being resettled from Turkey to the EU, he said: “Further EU engagement is essential.”

“What is even more worrying is that the EU turns a blind eye to such violations and even accuses Turkey on every occasion. We call on the European Union to speak on its own values and universal values as well and urge Greece to abide by international law.”

Human rights groups have also documented hundreds of cases of asylum seekers being robbed, abused, and stripped by Greek forces along the land border, or forcibly pushed back in boats along coastal borders.