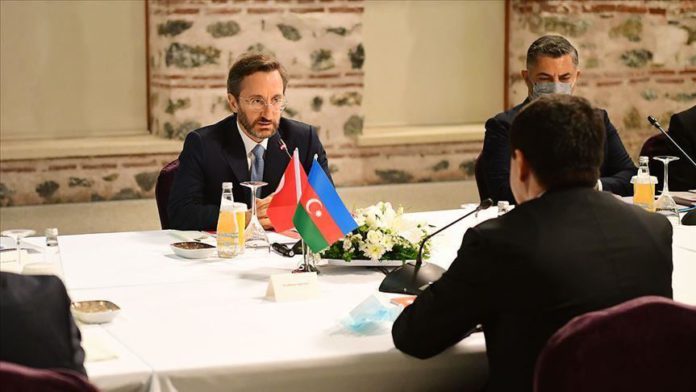 After a one-on-one meeting, Altun and Hikmet Hajiyev, who is also foreign policy chief for Azerbaijan’s Presidency, addressed media representatives in Istanbul.

Altun said that both countries were faced with various “threats to their vital interests”, according to a statement from Turkey’s Directorate of Communications.

Referring to former Azerbaijani President Haydar Aliyev’s maxim of “two states, one nation”, Altun said the leaders of both states had shown the world their deep-rooted friendship.

Altun went on to say that Turkey and Azerbaijan want to further strengthen bilateral relations, especially in the fields of politics, economy, culture, and security.

“In this atmosphere of chaos and turbulence where the international order is almost about to collapse and the new world order is yet to be established, as is the case in every other area, we can only win in the area of communications only if we are together,” Altun said.

He said that building new partnerships between Turkey and Azerbaijan “is not a choice but an obligation” taking into account the global conditions.

The two sides also agreed to establish a joint media platform to inform people and dissipate rumors and propaganda.

Altun said both the public and private sectors could create content for television, radio and digital platforms.

For his part, Haliyev said Azerbaijan is very pleased with the achievements of Turkey in all areas, ranging from economy to foreign policy.

“Our goal is to further develop and strengthen our fraternity,” he said.

He said that Azerbaijan and Turkey will make important gains from the close cooperation and coordination of the public and private sector institutions in the fields of media and communications.