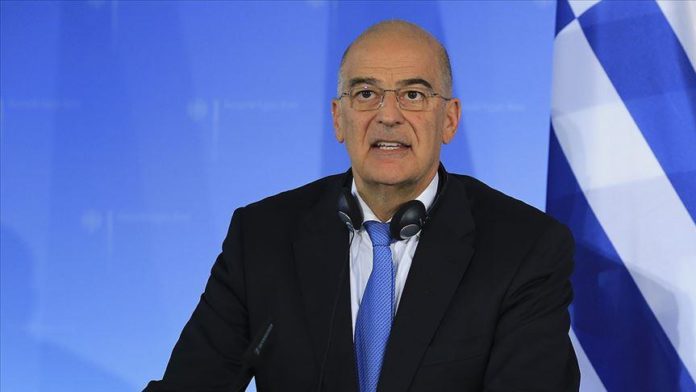 Greek Foreign Minister Nikos Dendias on Tuesday expressed willingness to meet his Turkish counterpart Mevlut Cavusoglu, but said “it must be carried out in the right climate.”

Speaking at a news conference after meeting his Palestinian counterpart Riyad al-Maliki in the Greek capital Athens, Dendias briefly touched upon the new round of consultative talks between Turkey and Greece.

Dendias said he hopes that talks will lead to find a common ground to resolve “the sole bilateral dispute” between the two countries.

“In other words, the delimitation of the Exclusive Economic Zone and continental shelf in the Aegean and the Eastern Mediterranean, in accordance with international law and the UN Convention on the Law of the Sea,” he said.

Dendias noted that political consultations between the Turkish and Greek Foreign Ministries will take place in Athens on Wednesday.

“At this point I would like to add – and I have said this in the past – that I am willing to meet with my Turkish counterpart and friend Mevlut Cavusoglu, but for such a meeting to have a point, of course, it must be carried out in the right climate,” he added.

The two countries are looking for solutions to political problems and maritime disputes regarding the Aegean and Eastern Mediterranean seas.

Turkey, which has the longest continental coastline in the Eastern Mediterranean, has rejected maritime boundary claims by EU members Greece and the Greek Cypriot administration, stressing that their excessive claims violate the sovereign rights of Turkey and the Turkish Cypriots.

Ankara last year sent several drill ships to explore for energy in the Eastern Mediterranean, asserting its rights in the region, as well as those of the Turkish Republic of Northern Cyprus (TRNC).

*Writing and contribution by Busra Nur Cakmak in Ankara.