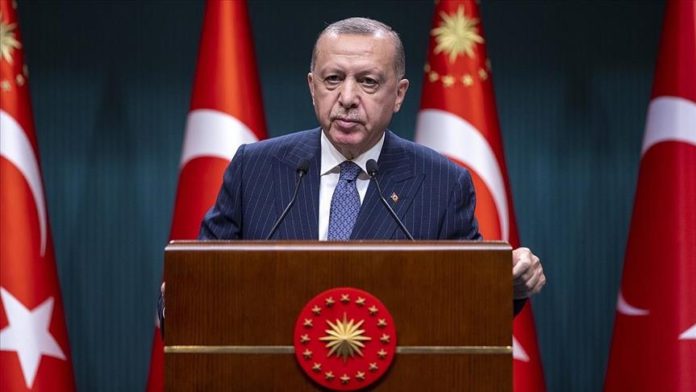 A top terrorist of the Fetullah Terrorist Organization (FETO) in Central Asia was nabbed abroad in an operation by Turkish intelligence, Turkey’s president said Monday.

Including Orhan Inandi, the latest capture, over 100 FETO terrorists have been brought back from abroad since the group’s defeated 2016 coup in Turkey, Recep Tayyip Erdogan said after a three-hour-plus Cabinet meeting at the presidential complex in the capital Ankara.

FETO and its US-based leader Fetullah Gulen orchestrated the defeated July 15, 2016 coup in Turkey, which left 251 people dead and 2,734 injured.

Turkey will continue efforts to fight and eliminate the FETO terror group, along with the terrorist PKK/YPG and Daesh/ISIS, Erdogan added.

“As a result of Turkey’s successful anti-terror operations, for the first time in its history, the PKK’s so-called senior leaders cannot move, gather, or manage the organization in northern Iraq,” Erdogan said, referring to a region near the Turkish border where the group often plans attacks.

On Turkey’s fight against the COVID-19 pandemic, Erdogan urged everyone to get vaccinated to protect themselves, as well as their loved ones.

Until herd immunity is reached, everyone should follow mask, social distancing, and hygiene rules, he added.

Estimates for the second quarter indicate that Turkey’s gross domestic product (GDP) will grow at an annual rate of around 20% in 2021, Erdogan said.

He said Turkey’s export volume rose 40% in the first six months of this year from the same period last year.

Turkey’s total exports are projected to climb above $200 billion by the end of 2021, a first in the country’s history, he added.

Erdogan said Turkey boosted employment by 2.8 million since the start of the coronavirus outbreak in April 2020 by compensating for lost jobs.

“Direct support payments have surpassed 150 billion liras ($17.3 billion) since the start of the pandemic. We expect this amount to reach 3.5% of our GDP by the end of this year,” he said.

“We will not allow those who try to raise the prices of meat, milk, and grain due to the conditions of pandemic and drought,” he vowed.

Erdogan said corporate income tax will be lowered to 20% starting in 2023.

“Fighting high inflation requires teamwork. Our Central Bank has a decisive approach to solve this,” he added.