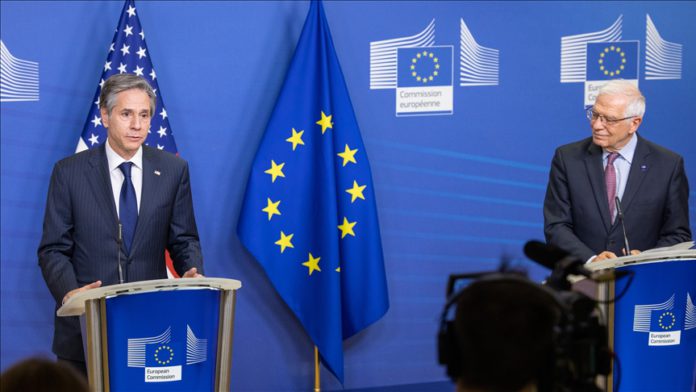 Top officials of the European Union, US, NATO, and the Organization for Security and Co-operation in Europe (OSCE) held discussions on Tuesday to coordinate their diplomatic positions on Russia.

“They discussed latest developments and diplomatic activities related to Russia’s military buildup in and around Ukraine, and Moscow’s demands for rearrangements in European security, including the letter by Russian Foreign Minister Sergey Lavrov on Jan. 31,” the statement said.

The leaders reaffirmed that “the fundamental principles of the European security architecture” need to be upheld.

They agreed to continue discussions on the matter and underlined that the OSCE is the right platform for exchanges on European security.

NATO last week rejected Russia’s demands to withdraw its troops and weapons from Eastern Europe and to halt the integration of Ukraine, urging Moscow to focus on diplomatic engagement and to start talks on arms control.

The US and its European allies have been warning that Russia is setting the stage for an invasion of Ukraine by positioning over 100,000 troops on its border with the former Soviet republic, along with significant artillery and tank deployments.

Moscow has denied the claims, saying its troops are there for regular exercises.