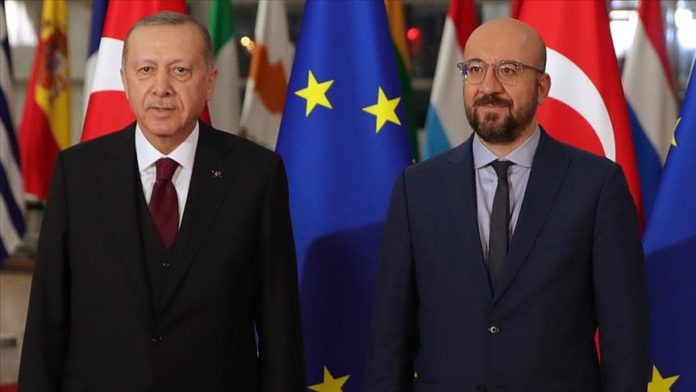 Turkish President Recep Tayyip Erdogan spoke over the phone with the head of the European Council, an official statement said on Tuesday.

The statement by Turkey’s Communications Directorate said Charles Michel called Erdogan to inform him and exchange views on the recently held EU summit.

During their conversation, Erdogan said Turkey evaluates every positive step taken in Turkey-EU relations as “a new window of opportunity.”

Underlining that some countries consistently put efforts to cause a crisis while Turkey is trying to turn a new page with the EU, Erdogan said the EU-Turkey relations should get rid of this vicious cycle as soon as possible.

Turkey reiterated its readiness for exploratory talks with Greece, the president said, adding that the Greek side has constantly avoided negotiations by making excuses and has taken provocative steps in recent weeks.

Emphasizing that Turkey’s Eastern Mediterranean policy is based on fairness and justice, he said the Turkish side always makes necessary efforts for a fair, permanent and sustainable solution in the region.

Turkey wishes that the EU will adopt a sensible and constructive attitude towards Turkey, he added.

The declaration, issued following the conclusion of two-day summit on Dec. 11, reiterated the EU’s commitment to “defending its interests and those of its member states as well as to upholding regional stability.”