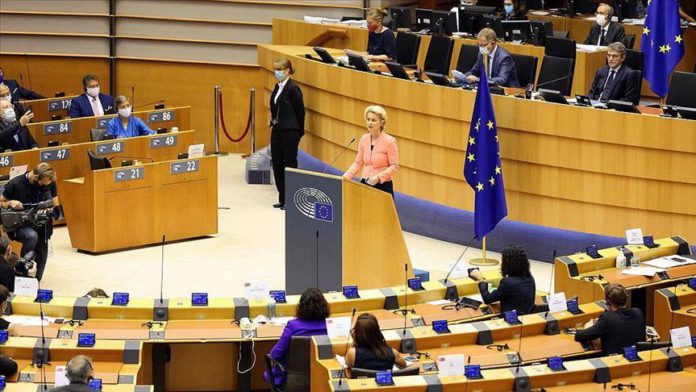 The European Commission head on Wednesday praised a Turkish exploratory ship returning to port, saying it would help lower tensions in the Eastern Mediterranean.

“De-escalation in the Eastern Mediterranean is in our mutual interest,” Ursula von der Leyen said in her annual State of the Union speech to the European Parliament in Brussels, calling the return of the Oruc Reis ship “a positive step in this direction.”

The ship’s return was “necessary to create the much-needed space for dialogue,” von der Leyen added, voicing solidarity with Greece and the Greek Cypriot administration of Southern Cyprus and pledging to protect “their legitimate sovereignty rights.”

Turkey on Monday returned the Oruc Reis, an energy exploration ship, to port for restocking and maintenance work.

Greece, Southern Cyprus, and other EU members have tried to block Turkey’s energy exploration, claiming it is searching in Greek waters, using a maximalist view of Athens’ maritime territory based on small islands near the Turkish coast.

Turkey – the country with the longest coastline on the Mediterranean – says this view is illegal and makes no sense, and has urged negotiations with no preconditions to lay out fair sharing of the region’s resources.

“Turkey is and will always be an important neighbor,” said von der Leyen, acknowledging how Turkey hosts millions of Syrian refugees and faces many challenges in the region.

Von der Leyen also addressed developments in Belarus amid protests over last month’s controversial presidential election, stating that the people of the country should be free to decide their own future, in a possible hint that Russia should not intervene.

Referring to the alleged poisoning of Russian opposition leader Alexey Navalny, she spoke about Moscow’s pattern of using chemical agents against its perceived enemies.

“No pipeline will change that,” the German politician said, sending a message to her own government led by Chancellor Angela Merkel, which has been criticized for buying Russian gas and going ahead with the North Stream pipeline project.

Without mentioning US President Donald Trump, Von der Leyen also criticized “major powers” who either pull out of multilateral institutions or take them “hostage for their own interests.”

This is why she suggested the EU take the lead in reforming multilateral institutions, with a special focus on the World Trade Organization and the World Health Organization, she said.

At the same time, she announced that the EU will co-host a global health summit on COVID-19 developments together with Italy, which will take the G20 presidency next year.

She cited the words of the late Margaret Thatcher – the iconic British Conservative prime minister – who said “Britain does not break treaties.”

She admitted that negotiations on the future relationship between the bloc and its former member state were difficult and warned that chances of a timely agreement fade with each day of delay.

As the EU suffered a 12% loss of GDP in the second quarter of 2020, Von der Leyen also called on the European Parliament and member states to adopt as soon as possible the bloc’s next seven-year budget and the recovery fund attached to it.

She suggested raising the bloc’s 2030 target for emission reductions to 55% in order to achieve climate neutrality by 2050.

She also announced that the European Commission would soon reveal a new industry strategy, reforms to the borderless Schengen zone, as well as a framework on the European minimum wage.

Based on lessons learned during the coronavirus health crisis, the EU might also take over healthcare competences from member states, Von der Leyen proposed.