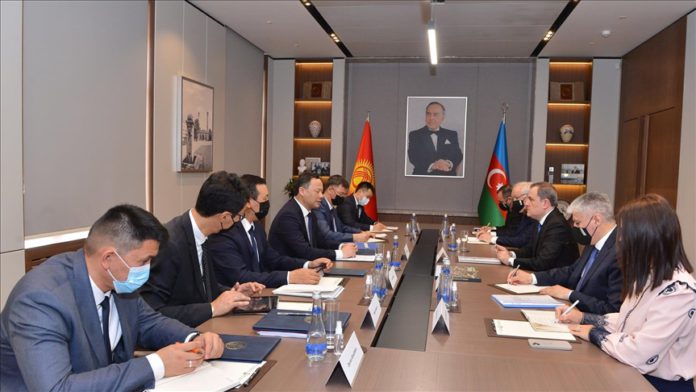 The foreign ministers of Azerbaijan and Kyrgyzstan on Friday discussed bilateral cooperation, the Azerbaijani Foreign Ministry said in a statement.

Cooperation within the framework of international organizations, as well as regional security issues were discussed in the meeting, according to the press release.

The two ministers who were accompanied by delegations talked about the expansion of economic and trade relations, cooperation in transport and transit, including the attraction of investors to the Alat Free Economic Zone, as well as prospects for cooperation in agriculture, tourism, culture and education.

Kazakbaev highlighted the “historical ties and fraternal relations” between the two countries, and expressed interest in raising ties to the level of strategic partnership.

A bilateral cooperation agreement was also signed for 2021-2022.

Bayramov appreciated the support of “friendly” Kyrgyzstan on the issue of Nagorno-Karabakh.

“Minister Jeyhun Bayramov briefed his counterpart about the situation in the region after the conflict, especially the decades-long demolition of the liberated areas, the destruction of historical and cultural heritage, huge damage to the environment, as well as the threat of landmines,” the statement said. “He informed about the ongoing restoration and reconstruction activities in these areas.”

Bayramov said the danger posed by land mines in the region is serious, adding that in the last seven months at least 28 Azerbaijani citizens lost their lives while 120 others got injured in mine explosions.

Relations between the former Soviet republics have been tense since 1991, when the Armenian military occupied Nagorno-Karabakh, also known as Upper Karabakh, a territory internationally recognized as part of Azerbaijan, and seven adjacent regions.

New clashes erupted last September, and ended with a Russia-brokered cease-fire on Nov. 10, 2020.

Azerbaijan liberated several strategic cities and nearly 300 of its settlements and villages from occupation during this time.