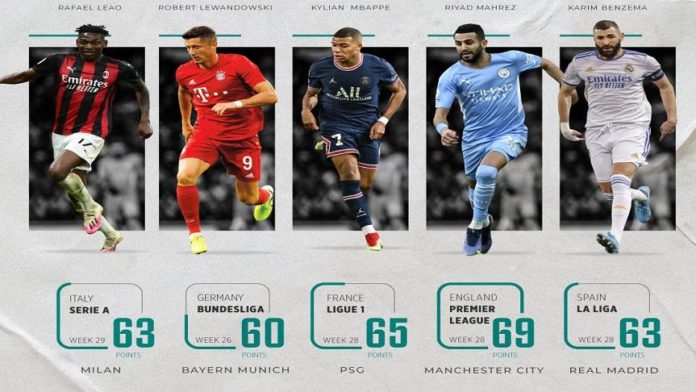 Bayern Munich dropped two critical points while Milan and Paris Saint-Germain win their matches to consolidate the leads in their respective leagues.

The second-placed Liverpool sealed 2-0 win over Brighton to chase leaders Manchester City who will face Crystal Palace on Monday.

Manchester City are top of the table with 69 points, three points ahead of Liverpool.

On Saturday, Cristiano Ronaldo went down in history as the all-time top scorer after his hat-trick brought a 3-2 victory to Manchester United against Tottenham Hotspur.

Chelsea and Arsenal are placed third and fourth with 59 and 51 points respectively, followed by Manchester United with 50 points on the table.

Real Madrid, which are currently at the top of Spanish La Liga, will face Mallorca on Monday.

The second-placed Sevilla drew 1-1 with Rayo Vallecano in an away clash.

Real Madrid are comfortable at the top of table with 63 points while runners-up Sevilla have 56 points, Barcelona and Atletico Madrid each have 51 points.

Having collected 63 points, AC Milan remain to stay top of Serie A following a 1-0 win over Empoli at home, now three points ahead of Napoli, who defeated Hellas Verona 2-1.

Inter Milan have fallen to third after they were held to a 1-1 draw with Torino, while fourth-placed Juventus beat Sampdoria 3-1.

With one match in hand, Inter have 59 points and Juventus collected 56 points.

Defending champions Bayern Munich were held to a 1-1 draw with Hoffenheim in the away game.

Paris Saint-Germain beat Bordeaux 3-0 to consolidate their lead at the top of French Ligue 1.

PSG now have 65 points at top, 15 points ahead of Olympique Marseille and Nice.