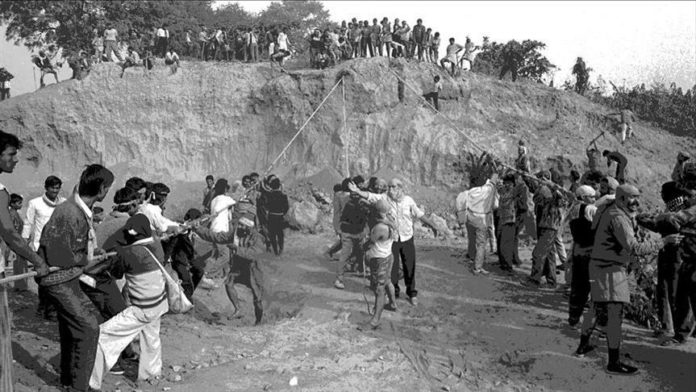 At least 28 years later, a court in northern India acquitted all accused in the demolition of the historic Babri Mosque case. This has come as yet another blow to the Indian Muslim community after Nov. 2019, when the Supreme Court, sidestepped the case about the title suit and handed over the mosque land to Hindus to construct a grant temple in the name of deity Lord Ram.

The mosque was demolished in 1992.

Here is a timeline of the Babri Mosque since the day it was constructed by the then Mughal Emperor Zahir ud-Din Babar in the early 16th century.

Mir Baqi, a military officer of the first Mughal Emperor Zahir ud-Din Muhammad Babur, orders the construction of the mosque in Ayodhya, a city in the Faizabad district of the northern Indian state of Uttar Pradesh.

For the first time, the Hindus claim the site was the birthplace of Lord Rama and that the mosque was constructed after the demolition of a temple. This claim leads to communal riots in the city during the reign of Nawab Wajid Ali Shah of Awadh. A platform known as Ram Chabootra is erected outside the mosque for Hindus to worship.

British build a fence separating the platform from the mosque, with the inner court to be used by Muslims and the outer court by Hindus.

Hindus approach the court to claim the property. Mahant Raghubir Das also asks for the building of a canopy on Ram Chabootra. British district judge rejects the claim.

In dead of night, some Hindus scale the wall and place the idol of Ram inside the mosque. Hindus spread the message that idols “miraculously” appeared inside the mosque. Jawaharlal Nehru, India’s first prime minister, takes a firm stand against the illegal installation of idols, insisting they be removed. Local official K.K.K. Nair (known for Hindu nationalist connections) refuses to carry out orders, claiming that they would lead to communal riots. He instead locks mosque. Hashim Ansari, a local Muslim, approaches court for the removal of idols and restoration of prayers.

Hindu man Gopal Singh Visharad files suit seeking permission for the right to worship the idols installed at “Asthan Janmabhoomi.” The court allows worship and does not remove the idols.

Hindu group Nirmohi Akhara files suit for possession of the site, claiming they are custodians of the spot where Ram was supposedly born.

Sunni Waqfs Board joins the court battle against forceful idol installation and seeks possession of the mosque and adjoining land.

The high court appoints a special bench to hear the dispute.

VHP activists partially damage the mosque. Police fire on and kill many of its activists.

Mosque razed to the ground by a frenzied mob. Riots break out all over the country.

Special court drops criminal conspiracy charges against L.K. Advani and Murli Manohar Joshi and Uma Bharti and others for their role in demolition.

High Court directs the Archaeological Survey of India to see if there is any evidence of claimed temple beneath the mosque.

After excavation to find evidence of a temple beneath the Babri Mosque site, the Archaeological Survey of India submits a report claiming evidence of stone columns and pillars.

Librarian Commission submits report accusing BJP politicians of playing role in the 1992 demolition of the mosque.

Lucknow bench of Allahabad High Court reserves its order and suggests all parties resolve the issue through friendly discussion, but little interest is shown.

Allahabad High Court rules that disputed land be divided into three: one-third going to Ram Lalla (underrepresentation of Hindu Mahasabha); one-third to the Muslim Waqf Board; and the remaining one-third to Nirmohi Akhara.

VHP declares a nationwide movement to collect stones for the construction of Ram Mandir at the site of the Babri Mosque.

On basis of the Babri Mosque demolition case, Supreme Court says charges against Advani and other leaders cannot be dropped and the case must be revived. It reinstates conspiracy cases against politicians like L.K. Advani, Murli Manohar Joshi, and Uma Bharti. The apex court also orders Allahabad Court’s bench of Lucknow to complete hearing within two years.

Supreme Court decides to start the final hearing. The court directs the Uttar Pradesh government to translate case documents of 9,000-plus pages (523 documentary exhibits) within 12 weeks. Documents include scripts and records written in various languages, including Pali, Arabic, Persian, Gurumukhi, and Urdu.

Lalit recuses himself, prompting the Supreme Court to reschedule a hearing before a new bench.

The mediation team submits the final report to the Supreme Court. Court decides to go ahead with the day-to-day hearing.

Indian Supreme Court decides to hand over the historic site of Babri Mosque to Hindus for the construction of a temple. The court also says Muslims be given alternate piece of land for building a mosque. But in the same breath, the court describes the demolition of the mosque as a criminal act. It further says, there is no evidence of any temple beneath the demolished mosque

Indian apex court extends the time for completion of trial in the demolition case by three months and directs that judgment should be delivered by Aug. 31.

The deadline is extended by another month until September.

The special Central Bureau of Investigations (CBI) court in Uttar Pradesh capital Lucknow concludes the hearing and announces that the verdict on the 1992 Babri Mosque demolition case will be delivered on Sept. 30.

The special CBI court acquits all the 32-surviving accused in the Babri Mosque demolition case. The verdict in the criminal case came almost 28 years after it was pulled down by a frenzied mob.

The court said the Babri Mosque demolition “was not pre-planned”.

Judge SK Yadav, on his last day in office, announced: “evidence against the accused is not strong enough.”

The court, however, said: “anti-social elements tried to demolish the [Babri Mosque] structure, and the accused [now acquitted] leaders tried to stop those elements.”

“The authenticity of audio, video and newspaper clippings provided by the investigating agency is not proved,” it added.

All India Muslim Personal Law Board — a representative body for Indian Muslims — responds to the CBI court verdict: “We are not satisfied with the verdict. It is against both evidence and the law. We will approach the High Court in this case.”