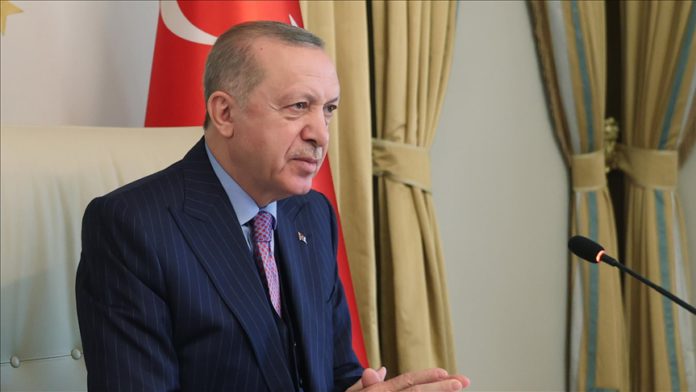 The Turkic Council has gained global reputation enough to be dubbed as an international organization, the Turkish president said on Wednesday.

Addressing the meeting of the Turkic Council via video link at Vahdettin Pavilion in Istanbul, Recep Tayyip Erdogan said the cooperation groups gained more importance in the face of the changes the world has been experiencing.

“The Turkic Council, which has completed its institutionalization in 12 years, has a high international reputation. I believe that it is time to entitle it an international organization,” he said.

“We hope to take a decision on this issue at the summit in Turkey,” he added.

Erdogan stressed that providing an uninterrupted connection to Europe via the Trans-Caspian East-West-Middle Corridor Initiative, shortly called Middle Corridor, will also increase the strategic value and prosperity of Turkic countries.

He also called to accelerate the work carried out in this field within the Council and to speed up negotiations to finalize the international combined freight transport agreement.

Turkey to stand by Azerbaijan by all means

Erdogan also congratulated his Azerbaijani counterpart Ilham Aliyev for their victory in Nagorno-Karabakh.

He reminded that 63 of 67 mosques in the Nagorno-Karabakh region were destroyed and churches were ruined.

“I attach great importance to the return of all of our fellow refugees to their lands by reviving this region of Azerbaijan,” he said.

The Turkish leader said it is important that they continue to stand by Azerbaijan by all means for the protection and revival of Turkish works in Karabakh.

“It is our hope that we will celebrate another festival in Shusha as soon as possible when we visit it after Eid al-Fitr,” he added.

The Turkish Cypriots are integral part of the Turkish world, Erdogan said, and urged solidarity with them.

The president said he believes that the Turkish Cypriots will not be denied the necessary assistance to lift the injustices and embargoes they have been subjected to for years.

“The participation of the Turkish Cypriot people in the activities of the Turkic Council such as culture, education, science, and sports will help to disburden the effects of the isolation,” he added.

The 8th summit of the Turkic Council is planned to be held in Istanbul on Nov. 12, 2021 depending on the COVID-19 pandemic situation, Erdogan said.

The Turkic Council, or the Cooperation Council of Turkic-Speaking States, was established in 2009 as an intergovernmental organization, with an overarching aim of promoting comprehensive cooperation among Turkic-speaking states.

The council consists of Azerbaijan, Kazakhstan, Kyrgyzstan, Turkey, and Uzbekistan as member countries and Hungary as an observer state.