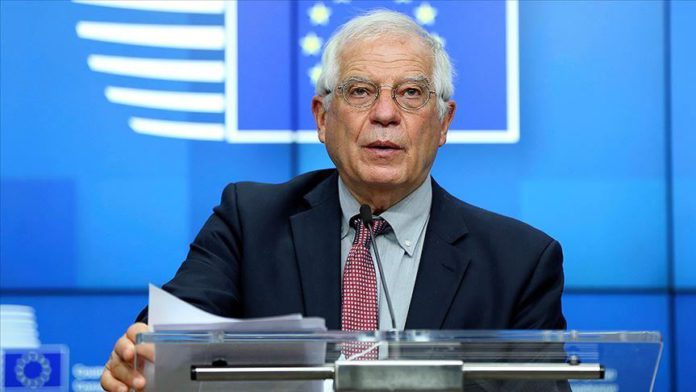 European Union foreign ministers on Monday discussed relations with Turkey and international issues in their first in-person meeting since the COVID-19 pandemic.

Relations between Turkey and EU should be strengthened and developed in line with “respect for European values, principles, and interests,” EU foreign policy chief Josep Borrell told a press conference afterwards.

Borell said there is a consensus among foreign ministers that relations between Turkey and the EU have been under “continuous strain,” adding that developments in the Eastern Mediterranean and Libya directly affect EU interests.

“Several serious issues must be addressed by Turkey in order to change the current consultations and dynamics and create an environment of trust with Turkey which everybody wishes,” he said.

Some EU countries have taken exception to Turkey’s military aid to Libya’s UN-recognized government headed by Prime Minister Fayez al-Sarraj – given under a security pact between Ankara and Tripoli signed last December – as well an agreement laying out the countries’ maritime boundaries, reached the same month.

France has criticized Turkey while supporting Libyan warlord Khalifa Haftar, who has waged a war against the country’s legitimate government.

Borell also said the foreign ministers condemned Turkey’s decision last week to turn Hagia Sophia back into a mosque and urged Turkey to reconsider the decision.

On Friday, a Turkish court annulled a 1934 Cabinet decree that had turned Hagia Sophia into a museum, paving the way for its use again as a mosque after an 85-year hiatus. Previously it had been a mosque for almost 500 years.

Turkey has denounced foreign countries and organizations trying to tell it what to do about Hagia Sophia, calling such efforts attempts to damage its sovereignty.

Over 70 kg of marijuana seized in southern Turkey