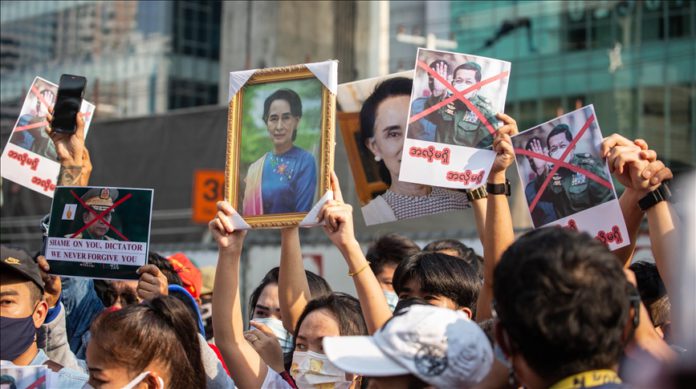 Tens of thousands of demonstrators, mostly young people, staged four separate rallies against the military coup in Myanmar on Sunday amid tight security and roadblocks on the major street of Yangon, the country’s largest city.

The police in Yangon are struggling to block the protesters who are marching to Sule Pagoda, the center of the city, according to Anadolu Agency’s freelance reporter in the city.

He said the citizens cheered the demonstrators by clapping and offering food and water, adding the protesters marching on various city roads are avoiding any conflict with the police during the anti-coup demonstrations.

Myanmar’s military junta on Saturday shut down internet services across the country amid anti-coup protests.

Nearly 300 members of Myanmar’s parliament on Saturday issued a joint statement rejecting the military junta that seized power in a coup earlier this week.

Lawmakers asserted that they alone are representatives of the people in a video posted on Facebook, according to news reports. They vowed to continue to struggle for democracy on behalf of constituents.

Meanwhile, the healthcare workers at government hospitals were at the forefront of the non-violent resistance, with some on strike and others registering their protest while continuing to tend to patients since Wednesday.

‘Russian bounties may have led to deaths of US troops’