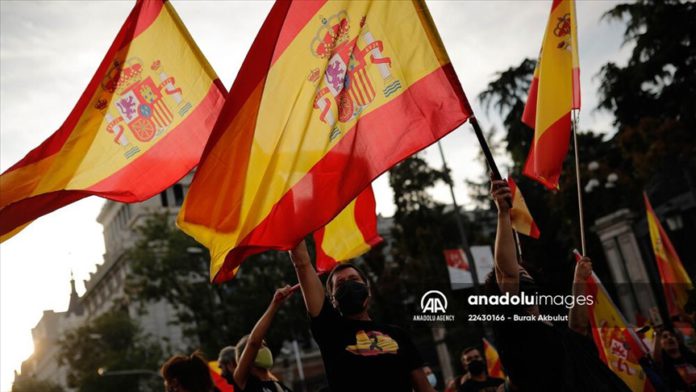 Around 25,000 people poured into the streets of Madrid on Sunday to protest the Spanish government’s impending move to pardon several jailed Catalan separatist leaders.

Red and yellow, the colors of the Spanish flag, filled the central square of Colon, where right-wing politicians and intellectuals accused the country’s left-wing government of destroying Spain’s territorial integrity.

“Today we ask Prime Minister Sanchez for coherency, dignity and to protect the national unity and constitution that he swore to defend,” Popular Party leader Pablo Casado said before the rally. “We ask him not to sell Spain’s national sovereignty for a handful of votes.”

“The pardons are a betrayal to all the Catalans who suffered from the separatist coup d’état and to all the Spaniards who respect the constitution,” said Santiago Abascal, leader of the far-right party Vox.

“The decision will be of great political importance,” she said. “We want to normalize the institutional relationship with Catalonia, stop the confrontation provoked by the separatists and right-wing Spanish forces and stabilize the situation.”

Pardons could be issued for 12 Catalan separatist leaders, including former vice president of Catalonia, Oriol Junqueras, who was handed 13 years behind bars for his role in organizing an illegal independence referendum and subsequently declaring independence from Spain in 2017.

Spain’s Supreme Court recently denied their requests to be pardoned, stating in the ruling that the leaders showed no sign of regret for their actions.

But amid talk of the pardons, Junqueras, who remains the leader of the left-wing separatist group ERC, said last week that he believes in abandoning the “unilateral” route to independence.

Junqueras, like the separatist Catalan government, still wants to see the wealthy Spanish region become an independent republic. But he now thinks the only way to do it would be through a legal independence referendum like that of Scotland in 2014.

Whether Spain’s left-wing government would go as far as reforming the constitution to permit a legal referendum on the Catalan independence remains to be seen.

According to a recent poll conducted by Sigma Dos, 61% of Spaniards are against pardoning the Catalan independence leaders.