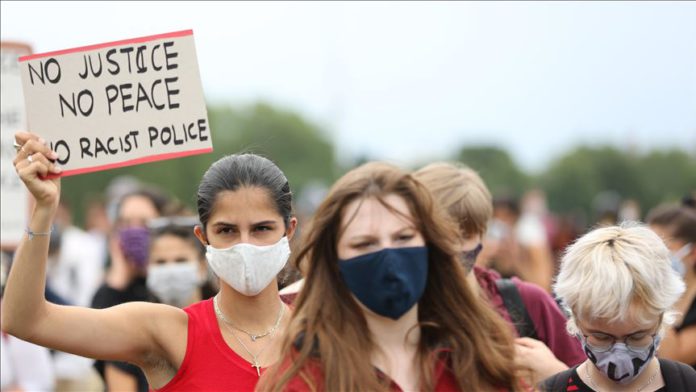 Thousands of people took to the streets of London Wednesday to march in solidarity with the Black Lives Matter (BLM) movement and protest the killing of George Floyd, an unarmed black man who died last week after being pinned down by a white police officer in the US state of Minnesota.

The protests were focused in Hyde Park, central London and started at 1 p.m. Demonstrators initially practiced social distancing. But as their numbers swelled, the space between protestors shrank. A considerable number of demonstrators wore face masks and gloves, however.

They chanted “Black lives matter,” “We will not be silent” and “No justice, no peace.”

One of the protest organizers told the Evening Standard, a London newspaper: “The injustice in the United States has refocused the similar problems we have here in the United Kingdom.”

“Since 1990, almost one person a week has died at the hands of the police or prison system in Britain, and we need accountability and reform here as well,” he said.

“This crisis has to stop if we don’t want to go in the same direction as the United States.”

At 5.25 p.m., Guardian journalist Mattha Busby uploaded a video of scuffles between protestors and police, and tweeted: “It’s kicking off now. Unclear exactly what started things. Police appeared to attempt to take a man from the crowd and pandemonium ensued.”

Shortly after, he tweeted: “I should add, things have calmed down significantly now after the video was taken. A couple of people were led away by officers. Tensions are growing and protesters here show no signs of heading to Trafalgar Square.”

“The crowd has been thinning out,” he later tweeted. “It would be a shame if earlier’s flash point at all overshadowed what has overwhelmingly been a peaceful and positive demo. Sky News are reporting a police officer was punched, triggering the incident and arrests.”

Commander Alex Murray from London’s Metropolitan Police uploaded a video to Twitter in the evening, where he said: “So we can see feelings are running really high today. It’s been a peaceful protest. We’re really grateful for everybody who has been peaceful, and we are committed to working with the people of London to make London a lot safer and to build trust with all communities.”

London-born British actor John Boyega, who rose to fame for his role in the most recent Star Wars films, attended the protest at Hyde Park and made an impassioned speech. The video of the speech and photos of him went viral on social media.

The first three names are of killed African Americans; Stephen Lawrence was a black British teenager murdered in an unprovoked racist attack on April 22, 1993. Five suspects were arrested but none charged at the time. Police and prosecutors were criticized for institutional racism and the case has become a cause celebre, highlighting structural racism in the UK. In 2012, two of Lawrence’s killers were finally convicted of murder.

“I’m speaking to you from my heart.”

Stand Up To Racism, an anti-racism campaign group, called on Brits to “take the knee” on their doorsteps at 6 p.m. as a show of solidarity.

The idea was inspired by American football quarterback Colin Kaepernick, who took the knee in protest in 2016. It has since become linked with the Black Lives Matter group.

The Daily Mail quoted one of Stand Up To Racism’s members as saying: “Racism is the underlying condition that continues to kill black and BAME communities,” referring to Black, Asian and minority ethnic people.

“Take the knee at 6 p.m. because there is a boot on the neck of millions of people in the BAME community.

“Part of the cure for the virus of racism is to embrace anti-racism and anti-fascism.”

UK police leaders published a joint letter Wednesday, saying: “We stand alongside all those across the globe who are appalled and horrified by the way George Floyd lost his life. Justice and accountability should follow.”

The police added they were “appalled” by the damage and violence in US cities and hoped that “peace and order will soon be restored.”

Turning to policing in the UK, the letter said: “In the UK, we have a long established tradition of policing by consent.”

“Officers are trained to use force proportionately, lawfully and only when absolutely necessary,” the letter said. “We will tackle bias, racism or discrimination wherever we find it.”

With regards to the protests in London and around the UK, the police said: “We know people want to make their voices heard. The right to lawful protest is a key part of any democracy, which UK police uphold and facilitate.”

The letter added that the novel coronavirus remained “a deadly disease” and urged people to work with police officers and respect restrictions on gatherings.

Tobias Ellwood, a British MP and chair of the House of Commons Defence Committee, uploaded a video of protestors from his office window and tweeted: “Moving to see this powerful and peaceful demonstration of solidarity supporting #BlackLivesMatter outside Westminster right now. Scenes like this are happening across the world. Politicians must listen.”

On Sunday, thousands of protestors took to Trafalgar Square in central London and outside the US embassy, while hundreds of others marched through the south London districts of Peckham and Brixton on Monday.

The protests in Trafalgar Square led to 23 arrests, according to Sky News, at least three of which were for breaching COVID-19 measures.

BLM protestors have called for further demonstrations in London at Parliament Square on June 6 and the US Embassy on June 7.

The US has seen protests since last week when a video went viral showing Floyd being pinned down by Derek Chauvin, a white police officer in Minneapolis, Minnesota, as he was being arrested.