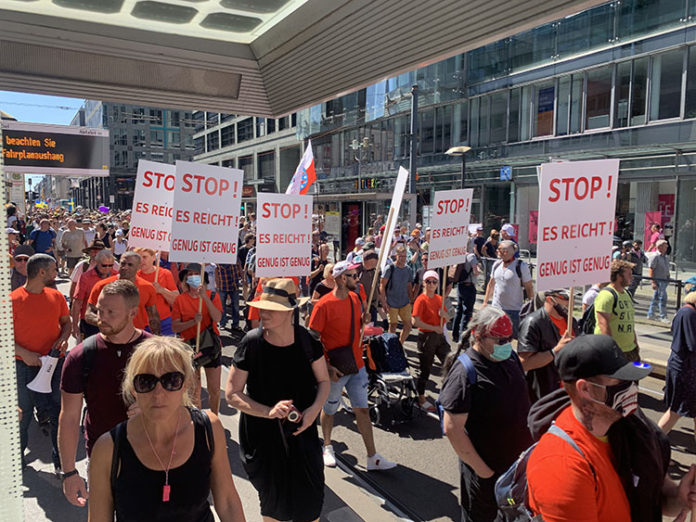 Thousands of people, among them many neo-Nazis, took to the streets in downtown Berlin to protest coronavirus restrictions amid an ongoing rise in the number of new COVID-19 cases.

Around 15,000 protesters, refusing to wear face masks and not complying with the social distancing rules, called for an end to the COVID-19 restrictions.

Police had repeatedly urged the demonstrators to abide by the social distancing rules.

Organized by coronavirus deniers and neo-Nazi activists, the motto of the demonstration was “The End of the Pandemic – Freedom Day” based on the title of a propaganda film produced by Leni Riefenstahl about the Nazi party congress in 1935.

People voiced opposition to protective measures with whistles and chants like “freedom” or “resistance”.

Slogans such as “The biggest conspiracy theory is the coronavirus pandemic” were also heard from within the crowd.

Many protesters also yelled at people, who were watching the demonstration, calling on them to take off their face and nose protection.

Police units blocked off the protest march and counter-demonstrations in several places as counter-protesters calling themselves “Grandmas against the right” shouted “Nazis out.”

Reacting to the protest march via Twitter, Saskia Esken, the co-chairwoman of the co-ruling Social Democratic party (SPD), lambasted the demonstrators calling them “Covid idiots for celebrating the second wave in Berlin” without observing the social distancing rules and wearing a face mask.

“They not only endanger our health, they endanger our successes against the pandemic and for the revitalization of the economy, education and society. Irresponsible!,” Esken added.

Economy Minister Peter Altmaier had recently called for tougher penalties for violations of coronavirus restrictions and demanded a decisive action in the event of “irresponsible misconduct.”

German health authorities reported 955 new infections in a day, up 75 people from the previous day, according to the German disease control agency Robert Koch Institute (RKI).

Since the outbreak of the coronavirus, at least 209,653 people in Germany have been infected, with 9,148 deaths, according to the RKI on Saturday.