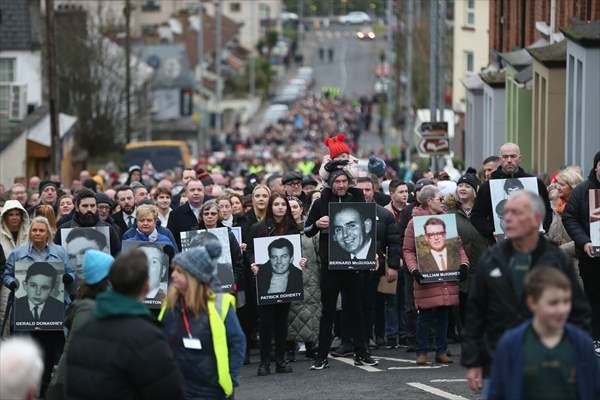 Thousands of people gathered on Sunday morning in Londonderry, a northwestern city in Northern Ireland, to commemorate those who were killed by British soldiers 50 years ago on Bloody Sunday.

A procession saw family and friends of the 14 victims of the incident marching to the monument in Bogside, where the shootings had taken place, with photographs and flowers.

The procession followed the route of the original civil rights march of Jan. 30, 1971 from Creggan shops to the Bogside.

Fourteen children led the walk holding a rose each and wreaths were later laid by families at the Bloody Sunday monument as the marchers arrived there.

The ceremony continued with prayers and talks from the religious leaders and representatives of the local community.

Speaking to Anadolu Agency, McDonald described the service as “moving.”

“It’s a very emotional day here in Derry and you can but be struck by the dignity and the resilience of the families and the whole community,” she said.

McDonald said the British government should dump their plans to end all prosecutions related to the Troubles before 1998.

She said: “There’s a big message from Derry today about peace, about progress, about the need for truth and justice and [British Prime Minister] Boris Johnson should listen carefully and dump any plan that he has for amnesty.”

Charlie Nash, brother of William Nash who was shot dead by British Parachute Regiment on Bloody Sunday, said the infamous incident’s details must be made public.

“They have to come out and tell what happened and stop telling lies,” he said.

A young marcher, who came up to Derry from the Irish Republic thinks it is important to learn about the Bloody Sunday because “it did change the entire island of Ireland.”

“It is such an important thing that everyone should learn,” she said.

“Families of the victims seek for justice and there’s no time limits on getting fairness,” said Fergus O’Dowd TD, chairman of the Committee on the Implementation of the Good Friday Agreement.

He said: “And people who murdered here, they are entitled to their day in court with the victims. Families to those who killed them should face full rigors of the law, even after 50 years.”

Derry was the scene of the infamous massacre in 1972 when British soldiers shot 27 unarmed people during a civil rights protest. Thirteen were left dead on the streets with wounds from the soldiers’ fire. A fourteenth victim died months later.

Anger about Bloody Sunday spread across the world as it was recorded by television crews and generated a wave of recruits for a resurgent Irish Republican Army (IRA).

The killings accelerated Northern Ireland’s descent into conflict between the British government and pro-British paramilitaries on one side and Irish Republicans and nationalists on the other.

The UK government initially claimed that the soldiers were responding to gunfire from nearby buildings – a finding that was supported by an early investigation called the Widgery Report.

But after years of pressure from victims’ families, the 12-year Bloody Sunday Inquiry, also known as the Saville Inquiry, found that the victims had not posed a threat to the soldiers.

In June 2010, then-Prime Minister David Cameron issued an official apology for the killings on behalf of his government, confirming that those killed were innocent victims.

He said the killings were “unjustified and unjustifiable.”

The 1998 Belfast peace deal – dubbed the Good Friday agreement – largely saw the end of the violence, known as the Troubles, in which more than 3,500 people lost their lives.

The 50th anniversary of Bloody Sunday is remembered in Londonderry and other corners of Northern Ireland and the UK with special events throughout the week.