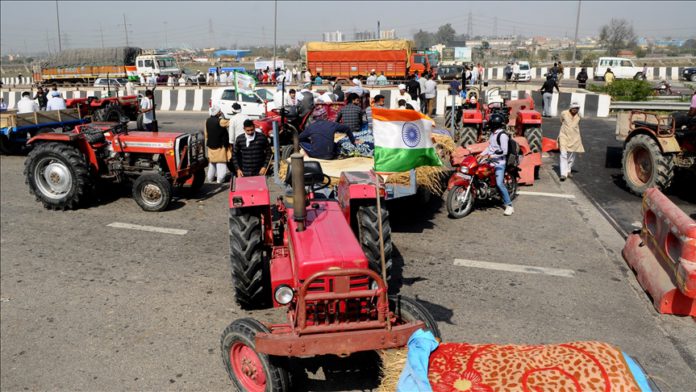 Thousands of farmers have been camping on the outskirts of the capital New Delhi since November last year in protest against three agricultural laws introduced by the government aimed at liberalizing the agricultural sector. Farmers, on the other hand, argue that the new legislatures would jeopardize their livelihoods.

“Until last evening, more than 50,000 women from Punjab reached the protest site at Tikri to join us. Even women from neighboring areas and states have arrived today,” Sukhdev Singh Kokri, a farmer leader, told Anadolu Agency.

He vowed that farmers will not end the protest until the government repeals the new laws.

Several women who joined the protest say they want to show their strength on the women’s day.

“Today is an important day and we want to show our strength… our protest will continue until the government listens to us,” said Paramjeet Kaur, a protestor from the northern Punjab state.

Protests against the new laws started last September and on Jan. 26, clashes between farmers and the police took place in several locations in New Delhi, with the situation deteriorating in central Delhi, when a large number of protesters were able to enter the historic Red Fort of the 16th century with their tractors.

In January, the country’s Supreme Court ordered an indefinite stay in the implementation of the legislation, but farmers are insisting on repealing them. Several rounds of government negotiations with the protesting farmers also failed.

The movement, one of the biggest challenges faced by Prime Minister Narendra Modi since coming to power in 2014, has also got international support.