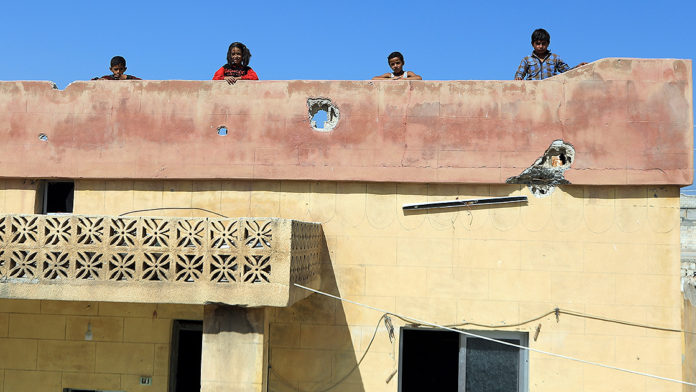 One year ago, when Turkey launched Operation Peace Spring to eliminate terrorist organizations threatening its security, thousands of families in Tal Abyad had had to flee to Turkey and to the areas controlled by the opposition military.

Syrians who had fled to Turkey and areas controlled by Syrian rebels in N. Syria from terror groups occupying their homeland continue to return to town cleared of terrorists by Turkey’s Operation Peace Spring.

As life returns to normal in Tal Abyad after it was freed from terrorists a year ago by the Operation Peace Spring, maintenance and restoration efforts continue in the town in northern Syria. As a result, the return of the town’s residents has gained impetus.

Mahmoud Khalaf Abu Ukba, one of the returned residents, told Anadolu Agency that in 2014, he had to escape from Daesh/ISIS terrorist organization to seek refuge in Azaz town, controlled by Syrian rebels.

“I lived in Azaz for five years. Thanks to the operation of the Turkish-backed Syrian National Army (SNA), we regained our lands. We are happy to be back home.”

Abu Ukba also remarked that water and electricity were reinstated and the town’s general situation has been improving.

Ahmad Hafyan, another resident of the town who returned from Jarabulus after the liberation, expressed his gratitude to Turkey for supporting their return to native lands.

He also told that YPG/PKK terrorists demolished their homes when they learned his brothers joined SNA and participated in Operation Peace Spring.

“I had a stroke out of sadness when I saw my home in ruins. I am even having a hard time while speaking. I would like Turkey and charitable people to help with re-building my house.

“So far, 5,000 civilians returned to the region. We expect this number will increase amid improving services in the town,” Vail Hamdo, head of local council in Tal Abyad, added.

Tal Abyad was liberated from YPG/PKK terrorists by the Turkish Armed Forces and Syrian National Army on Oct.13, 2019, during Turkey’s counter-terror operation in northern Syria.

In its more than 30-year terror campaign against Turkey, the PKK — listed as a terrorist organization by Turkey, the U.S. and the European Union — has been responsible for the deaths of 40,000 people, including women, children and infants. The YPG is the PKK’s Syrian offshoot.