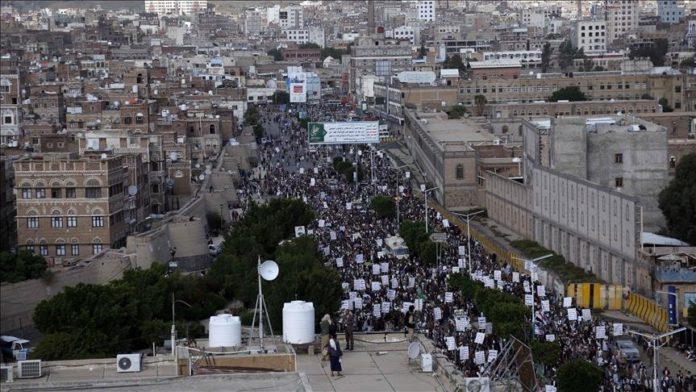 Thousands of Yemenis rallied in the southwestern province of Taiz on Saturday to mark the 11th anniversary of a popular revolution that toppled former President Ali Abdullah Saleh.

On Feb. 11, 2011, mass protests in Yemen forced Saleh out of power. The protests were part of a series of anti-government demonstrations that spread across several Arab countries that began in Tunisia in 2010 in what is commonly known as the Arab Spring.

During the Saturday rallies, participants waved national flags, pro-revolution banners, and chanted slogans in support of the Yemeni government.

“The sectarian project supported by Iran is a danger to Yemen and the Arab peoples,” reads one of the banners.

Speaking to Anadolu Agency, Ali Al-Hadqi, a lawyer and human rights activist, accused unnamed internal and external parties of “plotting against the Yemeni revolution and obstructing the completion of its goals.”

Mohamed al-Rumaim, a Yemeni activist, said “the Houthi coup against the legitimate government turned the peaceful Yemeni revolution into an armed struggle.”

“The youth of the February revolution are fighting on all fronts to confront the Iranian-backed Houthi project,” he added.

Iran supports the Houthi rebels, who in 2014 captured much of the country, including the capital, Sanaa, plunging Yemen into violence and anarchy.

A Saudi-led coalition aimed at reinstating the Yemeni government has worsened the situation, causing one of the world’s worst man-made humanitarian crises, with nearly 80%, or about 30 million people, needing humanitarian assistance and protection and more than 13 million in danger of starvation, according to UN estimates.

Amid tensions with Russia, NATO fortifies presence on eastern front