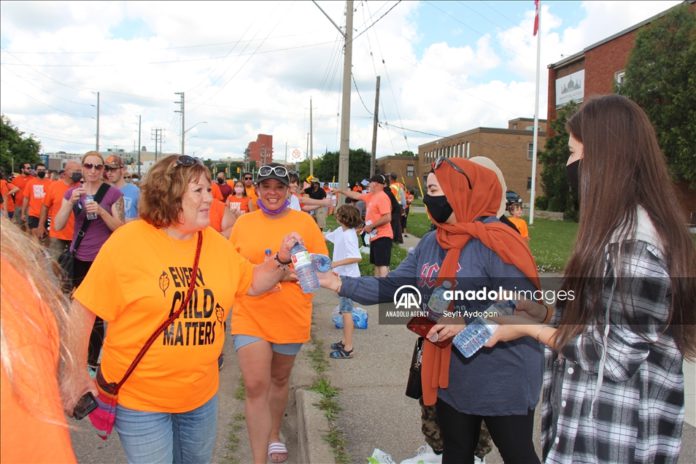 Tens of thousands of Canadians exchanged the traditional Canada Day colors of red and white to don orange shirts Thursday in a show of mourning for child victims of Indian residential schools.

An estimated 10,000 people gathered in London, Ontario and marches took place in Montreal, Thunder Bay and other cities.

BRANFORD, CANADA – JULY 01: People take part in a tribute march to the Mohawk Institute residential school, organized by Brantford Regional Indigenous Support Centre, for children who lost their lives while staying in residential schools, on July 01, 2021 in Branford, Ontario, Canada. ( Seyit Aydoğan – Anadolu Agency )But the major turnout was on Parliament Hill in the nation’s capital of Ottawa, where celebrations are normally held for Canada’s birth as an independent nation on July 1, 1867. People wearing orange shirts shouted “Shame on Canada!” and “No pride in genocide!”

The term ‘genocide’ has been used by Prime Minister Justin Trudeau to describe what was done to Indigenous children starting in the 1820s. In all, 139 Indian residential schools were set up across the country — the last one closed in 1996 — and 150,000 Indigenous children were taken from their parents and forced to attend the schools. The goal was to instill white culture in the “savages.”

There was a litany of horror at the schools, with abuse rampant and children often buried in unmarked graves — 1,148 have been discovered at three of the former schools in the past five weeks, leading to Thursday’s protests.

Traditional Canada Day celebrations were muted or cancelled in many communities, and Trudeau said in a statement obtained by Anadolu Agency that for some, July 1 is “not yet a day of celebration.”

“The horrific finding of the remains of hundreds of children at the sites of former residential schools in British Columbia and Saskatchewan has rightfully pressed us to reflect on our country’s historical failures and the injustices that still exist for Indigenous peoples and many others in Canada,” he said. “We as Canadians must be honest with ourselves about our past.”

Trudeau met Thursday with Phyllis Webstad, a survivor of St. Eugene’s Mission School in British Columbia, where 182 unmarked graves were revealed this week. She is the founder of the Orange Shirt Society and Orange Shirt Day. Webstad wore an orange top on the first day at the school, and it was stripped from her and she never saw it again. She was six years old.

She founded the Orange Shirt movement and tours the country, telling of her horror story as a little child at the school.

The meeting between the two was closed to the media.